TransEnterix is a minimally invasive surgical company founded in 2006 that originally sought to revolutionize general surgery through the use of flexible catheter-based technology. Soon enough, the SPIDER surgical system was born. The SPIDER is a disposable, manual surgical device that utilizes a single incision about the size of a dime to introduce various tools and a camera into a patients abdomen in order to carry out specific operations. The SPIDER is the first device to introduce true left/right hand instrumentation, enhanced flexibility and articulation, and internal triangulation in a patient side surgical platform.

To date, surgeons have carried out more than 4,000 operations since the device received FDA approval in 2009.

After TransEnterix conducted a soft launch of the SPIDER, they began receiving feedback from surgeons which led them to question whether or not the company should continue with its original plan of ramping up commercialization efforts and expanding its sales force for a global roll out of the SPIDER. While feedback was positive from surgeons, they kept mentioning specific qualities of Intuitive Surgical's da Vinci system that would be beneficial to have included in a patient side surgical platform like the SPIDER. Basically, surgeons wanted the best of both worlds.

In 2012, TransEnterix was at a crossroads: either continue commercializing a product it's been developing for years (and spent roughly $76M on), or shift gears entirely and focus on developing a patient side surgical robotic platform for general surgery. The company ultimately decided to take what it learned from the SPIDER and include that core technology as the base of their new device, the SurgiBot.

It is important to note that there are key factors that differentiate the SurgiBot from ISRGs da Vinci System. These factors include price, mobility, tactile feedback, patient side operation and more. The SurgiBot will cost ~$500,000 compared to da Vinci's ~$2 Million price tag. TransEnterix's low price point allows the company to target the 3,000+ small-medium sized hospitals and 5,000+ private surgery centers that have not yet invested in robotic surgery because of its steep costs. The SurgiBot is mobile and can easily be wheeled into operating rooms while the da Vinci takes up a lot of real estate and usually remains installed in the same operating room. The SurgiBot has full tactile force feedback, which makes navigating around a patients abdomen much easier for a surgeon, the da Vinci does not have this crucial capability. The SurgiBot allows the surgeon to operate in the sterile field, scrubbed in right next to the patient, where as the da Vinci has the surgeon out of the sterile field, working on the patient from a remote console several feet away. This is just a bare minimum, basic summary...a lot more detail can go into how the SurgiBot differentiates itself from the competition.

Now, fast forward three years and TransEnterix is on the verge of submitting their 510(k) filings to the FDA. If all goes as planned, the company will receive FDA approval in late 2015/early 2016 and begin selling the device shortly after. The company originally planned to submit the SurgiBot to the FDA in December of 2014, but a 6 month delay announced during last quarters earnings pushed that filing back to mid 2015. This delay led to a more than 50% decline in share value, which is when we were pounding the table to add more. It should be noted that this delay was not caused by drastic changes that were necessary for the SurgiBot to gain FDA approval, but rather for last minute tweaks (in some instances the relocation of a few screws) that required rigorous testing/validation.

After accumulating such a massive position in TransEnterix (relative to our entire portfolio) over the past year, a reflection is needed. Below are just a few bullet points that led to such a high conviction long thesis.


TransEnterix will report Q4 earnings tomorrow before markets open. Because the company ceased sales of its previous product to focus on developing the SurgiBot back in 2012, revenues hold little weight here. What does hold weight is the status of the current FDA submission/approval timeline for the SurgiBot, the current and projected cash burn rate, and commercialization plans.

The risks that lie ahead include: TransEnterix delaying the FDA filing again due to some unforeseen hiccup (it's happened once, it can happen again), the FDA pulling an about face and informing TRXC that they actually need to conduct human trials for SurgiBot approval instead of utilizing data from the SPIDER operations, which would delay them by roughly 3 months. In short, the only real risk is that this gets delayed by a few more months, which would indeed destroy value in the short term, but in the long term the thesis would remain unchanged.

Here is my 100% speculative opinion on why I believe TransEnterix is on schedule with their mid 2015 FDA filing of the SurgiBot: 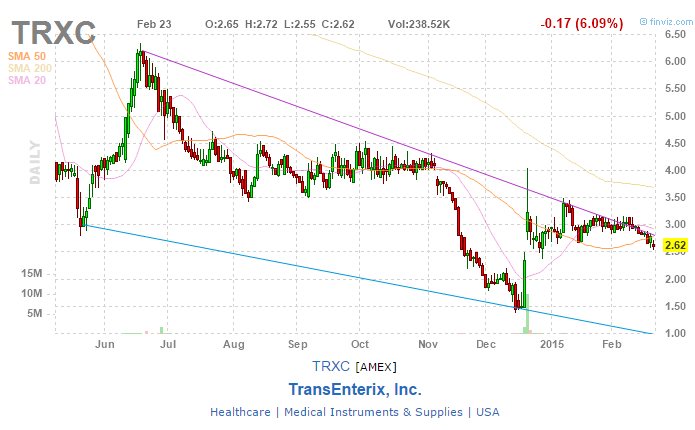 Technically speaking, TransEnterix has a fugly chart. The stock is in a clear downtrend, consistently getting rejected at that purple downtrend line. However, it has been putting up a sustained fight, and a decisive break above that trend line leaves for lots of ground to be recovered. The stock did hold its 50 day for a brief period of time, but recently broke below it. If a decisive sell off occurs, there is a lot of room to move lower.