It's been roughly one year since initiating a position in CoCrystal Pharma (COCP) at $0.56, and a fresh recap of the investment thesis helps reason why it's still being held.

CoCrystal, at this stage, is solely an investment in the people behind the company, which include Dr. Raymond Schinazi, Roger Kornberg, and Dr. Gary Wilcox.

Dr. Raymond Schinazi recently merged his company, RFS Pharma, with CoCrystal in November. RFS Pharma was founded by Schinazi in 2004. More than 90% of HIV patients take a drug developed by Schinazi. Schinazi was the founder of Pharmasset (acquired by Gilead for $11B in 2012), Triangle Pharma (acquired by Gilead in 2003 for $464M), and Idenix Pharma (recently acquired by Merck for $3.9B). Quite a track record for Dr. Schinazi.

Roger Kornberg is a nobel laureate who identified the role of RNA polymerase II and other proteins in transcribing DNA, and he created three-dimensional images of the protein cluster using X-ray crystallography. Kornberg utilizes the same crystallography technology when developing potential drug candidates at COCP.

Dr. Gary Wilcox played a key developmental role in the creation of Cialis while serving as VP at Icos, which was eventually acquired by Eli Lily for $2.3B in 2006. Following the sale of Icos, Dr. Wilcox and a former Icos researcher, Sam Lee, created CoCrystal Pharma.

CoCrystal has access to two  X-ray crystallography labs, one of which is through Stanford. Due to their high costs, there are only a handful of these labs in the world.

CoCrystal is developing novel therapies, utilizing X-ray crystallography, to treat various viruses, including Hepatitis C virus, the influenza virus, Dengue virus, Norovirus, and HRV. Right now, all potential drug candidates are in its pre clinical stages, so not much should be expected of this company for a long time, and they will need to dilute shareholders and raise money in the future, so beware. But, considering the people and technology behind this company and a long term horizon, it remains a speculative buy.

A potential HCV drug candidate, should be finishing pre clinical and entering clinical stages sometime in 2015.

It is also worth considering that CoCrystal Pharma is backed by Dr. Phillip Frost and Dr. Jane Hsiao of Opko Health. Both serve on the board and are investors, as is Opko Health and Teva Pharmaceuticals. 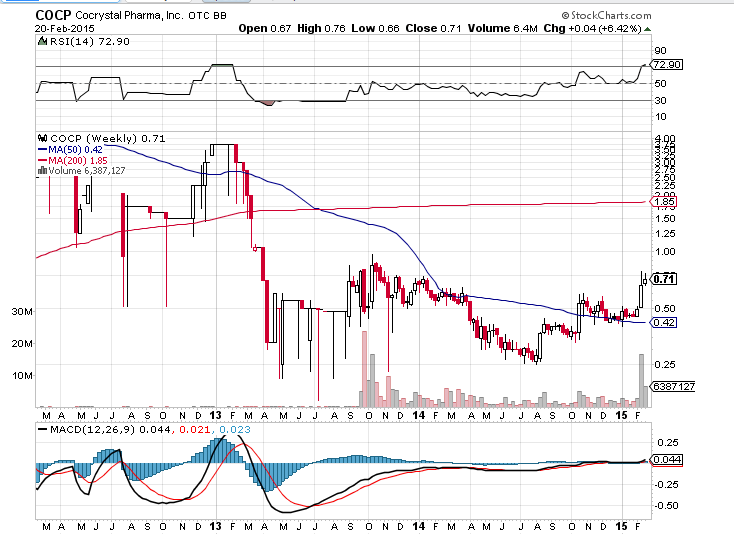 This is a risky, money burning machine with zero revenues/profits and is in just the beginning phases of creating a viable drug candidate. Assess your risk and time horizon before any consideration.