On April 17th, TransEnterix hosted an analyst event and had an expert panel of surgeons share their experience with the Surgibot to other practicing surgeons and investors during the 2015 SAGES event in Tennessee. These surgeons completed several laparoscopic procedures in porcine models, which were part of TransEnterix's GLP studies. The company also had a Surgibot at the event and demonstrated its use to the audience. Below highlights a few important statements from the expert panel of surgeons that, to me, confirm my bullish thesis on TransEnterix. To listen to the entire event and look at the full slide deck, click here. 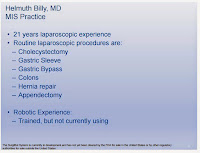 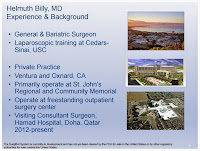 "Surgibot has a very efficient setup docking, keeps my room turnover times low, I really like to do maximal efficiency: as many cases as I can, and robotics in the past has interfered with that." Low turnover times for OR improves hospital efficiency and cuts down on costs.
"The ease of use is very easy, I can use this in more than one room....It's a very easy learning curve, my second case went down to about a third of what the first case was. It's very natural, I hate to use the word intuitive, but I already knew how to move the [Surgibot] instruments because they [TransEnterix] capitalized off what we already trained, and duplicated that very quickly." An easy learning curve can help speed up the rate of adoption of Surgibot among the surgical community.
"Unfortunately my assistants are kind of just standing there now. They don't really like the idea of coming into the room and doing nothing or being replaced but it does allow me to not have to schedule and worry about an assistant being there so I see great application with that." Another big cost saving metric that will help Surgibot generate ROI for hospitals in a short period of time.
"Our OR efficiency looks like it will be much better with this than it is currently [laparoscopic based procedures], and certainly with Da Vinci. There's a broad range of general surgery procedures which we call the bread and butter that this has application to." Broad procedure applicability for Surgibot appeals to both large and small hospitals/surgery centers. 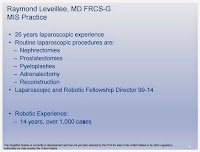 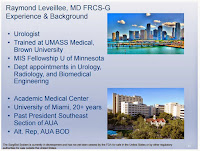 "The key to surgery is being able to triangulate, and what the Surgibot gives me is with a single port, triangulation. That allows me to come in at different angles that I can't do with any other straight standard laparoscopic instrument." TransEnterix is aiming to convert laparoscopic procedures to SurgiBot, where as Intuitive Surgical took the route of converting open surgeries to da Vinci. Therefore, while most investors will peg ISRG as a direct competitor to TRXC, more appropriate direct competitors would be Ethicon and Covidien.
"The Surgibot has promise to get us to that ideal of single incision surgery without all the cumbersomeness of using chopsticks and trying to figure out which hand is controlling which instrument, which is really what the problems have been with single site and natural orifice surgery." True left/right hand instrumentation, tactile feedback, and internal triangulation are just a few of the attributes that give Surgibot a competitive edge and make for a quick learning curve.
"This is the first company that has said we're going to make our instruments do what we want it to do and not retrofit, and, I think it overcomes many of the limitations of single port platforms." TransEnterix designs and produces every single part of the Surgibot in house, along with its disposable instruments. Rather than outsourcing this production, TransEnterix wants to have complete control over the product and have the ability to quickly make changes based off of surgeon feedback, leading to a superior product.
"By me being in the surgical field, if there is some mishap or if there's a critical step I can control every step of the way." Control is important during life or death situations.
"This would be ready to go tomorrow if it were released, I could buy one of these and use it in the OR tomorrow, so although I expect advancements and improvements over the next decade, this is good to go now." The Surgibot in its current form is ready to go, but down the line there is potential for significant upgrades/new generations of the Surgibot to meet more needs in the surgical field. 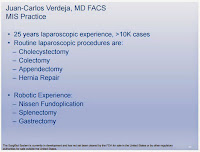 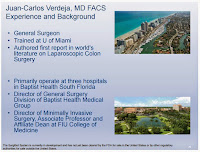 "I like being in the sterile field. If I get into bleeding, I like to be there."
"If you're sitting on a console 10 feet away, it's not that you're sitting on a console 10 feet away, it's your sitting on a console 10 feet away and you're not scrubbed in. If there's catastrophe on the field the first thing you have to do is: somebody has to undock the unit...who's holding their finger on what's bleeding? Then you have to move the entire apparatus off the field while you run outside and scrub so you come back in and you have to gown, and you have to glove, and you have get to the bedside, then you can actually think about cutting. If you think about the amount of time it takes to do that, it might be a few minutes, but it's a lifetime literally to that patient." In a life or death situation, every second counts, let alone minutes. Being patient side, scrubbed in during the entire procedure is a comforting feeling for both the surgeon and the patient.
"The strength of flexible instruments has been the big difficulty in the beginning. I've done over 600 SPIDER cases, and we struggled with flexible laparoscopy in the beginning because of the lack of strength, and that's been completely addressed [with Surgibot], and as far as the ability to move and do things with it, and you maintain that tactile feedback and tactile feedback is so important." The Surgibot has improved upon its predecessor, the SPIDER, in many different and important ways, including improved strength, ergonomics, and 3D vision for the entire operating room.
"The availability of something like this in an outpatient center I think would be a lot more viable of an option." There are more than 5,000 outpatient centers in the U.S. and less than 1% of them have a surgical robot.
Question and Answer with Panel
"Sitting vs. Standing?"
"Frankly, I hate to sit, it's painful for me to sit for hours....I like to stand and I like to be in the field. To me being on the field is more important than sitting or standing...I mean I guess I can bring in a barstool and sit if I need to sit." Great answer.
Also
"I can foresee a future where the Surgibot...he [Todd Pope] hates when I talk about it....I can see things going because I'm already thinking, I'm thinking five, six generations down, but I can see that the platform has a lot of expand-ability, it has a lot of compatibility in different arenas. In GYN in particular we haven't said much of anything, a lot of the GYN surgery would be extremely compatible with the Surgibot were we able to workout the distance situation, and I  think that's not an undo-able thing, that's just a matter of a little re-design which is painful to consider before your done with your first model." Surgibot will most likely not be TRXC's last platform. I'd expect further advancements and new generations of the Surgibot platform in the future (3-5 years)
"This [Surgibot] cuts out some of the extras you don't need, but exasperates the essentials like the 3D, flexible scope and flexible arms, rotation ability, and clutching." The Surgibot may not have all the bells and whistles of ISRG's da Vinci, but it doesn't need them to be successful. Not to mention, Surgibot has a long list of its own benefits that da Vinci cannot replicate (i.e. price point, tactile feedback, mobility).
Conclusion
The surgeon panel at TransEnterix's analyst event confirmed my thesis that the Surgibot is the next evolution in robotic surgery and has a significant advantage over its competitors, and not just from a low price and mobility standpoint, but from an operating/ease of use standpoint. The fact that Surgibot leverages the skills already taught to practicing surgeons means that the learning curve is minimal, which will help drive adoption once it hits the market.
Perhaps the biggest takeaway from this event is the future of the Surgibot platform and its potential for development. While the Surgibot has yet to be FDA approved, some surgeons are already talking about how they see potential upgrades/new generations of the platform in the future to expand its procedure applicability and meet more needs in the OR. While new generations of the Surgibot are immaterial to today's investment thesis, and years away from materializing, if at all (TransEnterix has not mentioned or confirmed anything regarding future generations of Surgibot, this is purely speculation from the practicing surgeons and myself), it provides another pathway for future growth of the company. It is worth noting that TransEnterix has
It is worth noting that TransEnterix has ramped up its hiring efforts in recent weeks, with several engineering and R&D job openings, however, I assume that for now, these jobs are more so focused on the roll out of the Surgibot, and not so much future product designs. 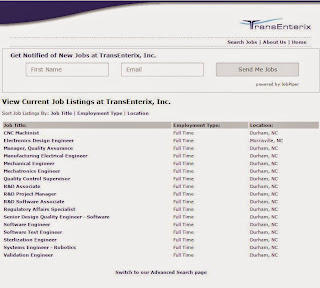 1 comment to ''Expert Surgeon Panel Weighs In On SurgiBot"