I have a love/hate relationship with SG Blocks. I love the company, its product, and its story, but I hate the stock. Over the past 1+ year, I have seen this stock trade zero shares for weeks on end and plummet more than 50% in choppy trading. But this should be expected for a micro-cap company that has an average 3 month volume average of less than 10,000 shares and is worth less than $4.3M in market cap (I've seen market cap as high as $21.5M over past year). Anyone who puts money in a stock with such risky characteristics should expect to never see that money again. This is a lottery pick, one that has the potential to generate impressive returns over a long period of time, but most likely will not. But it might! But probably not. That was my mindset when I purchased a few thousand shares of SGBX over a year ago (and it continues to be).
Having said that, SG Blocks is a rare micro-cap company in that it actually operates a growing business and does not participate in promotional stock campaigns to prop up its share price and improve trading liquidity.
What Does SG Blocks Do?
Simply put, SG Blocks is a construction company.
SG Blocks provides an alternative to traditional stick-built homes that is cheaper, stronger, and eco-friendly: shipping container homes. 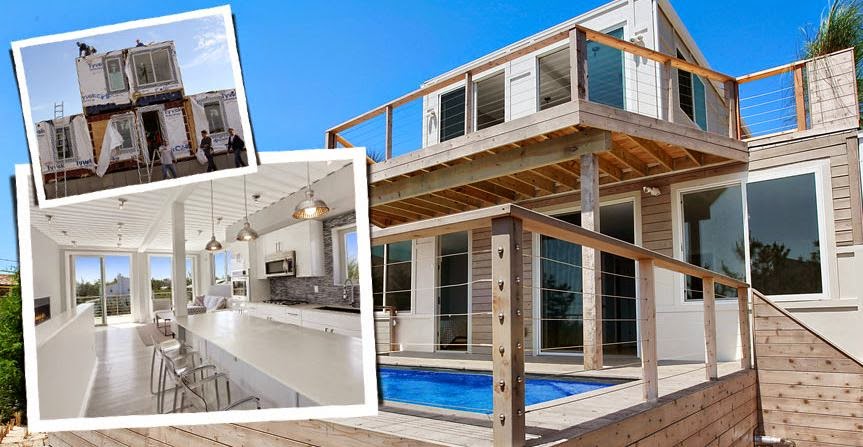 The company retrofits out of use shipping containers to construct a safe green building block, hence the name, SG Blocks. These SG Blocks are then used to construct everything from pop up retail shops, to U.S. military housing, to luxurious beach homes (pictured above). The company develops the units for a specific project, delivers and installs the units on site in a fraction of the time it takes with traditional stick-building construction methods. In some cases, the on site installation of the container structure can take less than a day, as did the recently completed 11 unit Bareburger restaurant in Long Island. SG Blocks product is building and inspection code approved, and offer several benefits to the environment, developer, and home owner.
Environmental Benefits

Developer Benefits
Shipping container construction allows the developer and architect to increase the speed to market, which reduces financing interest and increases rental income based on delivery speed. The buildings are LEED certifiable and they are more marketable to the public due to its eco-friendliness. 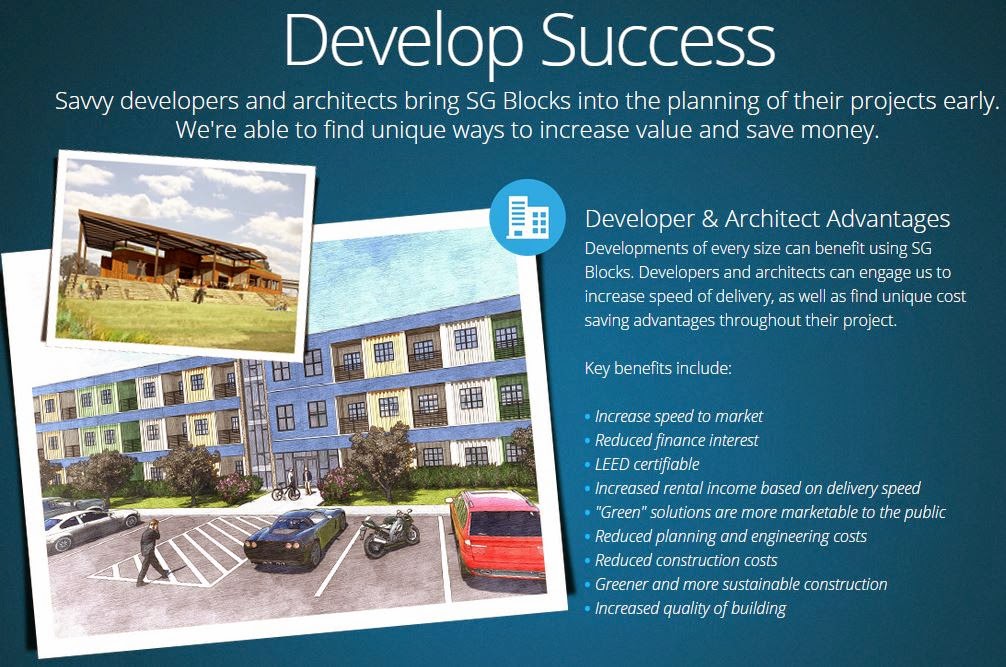 Source: www.SGBLOCKS.com
Home Owner Benefits
Home owners benefit from a high quality building structure that can withstand hurricanes and earthquakes, and is energy efficient. The buildings can be taken apart and transported to a new location, and on the flip side they can be easily expanded upon. The buildings are reminiscent of Lego blocks.
The buildings are fully insulated and, like any other building, can withstand the frigid cold during winter and the blistering heat of summer.
SG Blocks Customers
From an investor's perspective, what's more impressive than SG Blocks' product is its customer base. The company has built a few Starbucks retail outlets, a Marriot Hotel concept, Lacoste, Puma, Equinox, and Mini Cooper pop up retail shops, a 21 unit retail outlet, and buildings for the U.S. Military. Recently, the company completed a pop up restaurant for Taco Bell, and a permanent restaurant for Bareburger.
Growth Potential
Container based dwellings have been around for a while now, but whether or not they're here to stay is up for debate. While many architects and pundits argue that shipping container building is a fad that will eventually lose its shine, it can also turn out to be the beginning of an overall trend.

"...with the company's goal to build a drive thru window in 60% of the 1,500 new U.S. locations planned for the next five years -- this new concept is giving the company an opportunity to create more sustainability designed stores. Starbucks is now beginning to scale the modern modular drive thru concept, with both shipping containers and other prefab materials, to new markets across the U.S. with locations already open in Salt Lake City and Denver. While the store is assembled offsite, delivering and installing the structure takes less time than traditional stores and, at less than 1,000 square feet, is giving the company an opportunity expand into sites that were previously too small to sustain one of its more traditional stores."

Financials
For a $4.3M company, SG Blocks has solid revenues. The company is not yet profitable, but over the past year it has been cutting its losses and growing its revenue.
Revenue
2014 - $6.04M
2013 - $5.73M
Gross Profit
2014 - $1.47M
2013 - $0.58M
Net Loss
2014 - $1.54M
2013 - $2.16M
Current Assets - $1.3M ($860k in cash)
Source
The construction industry is very lumpy in terms of project pipelines, and that is no different for SG Blocks, especially considering its small size and revenue figures. This makes the business less predictable and much more volatile.
SG Blocks is on the right path to profitability. The company nearly tripled its gross profit year over year thanks to shifting its revenue streams away from the less profitable Project Management stream and towards the more profitable SG Blocks Sales stream. Due to the lumpiness of the business, there is no telling when the company will turn profitable.
As of March 31st, SG Blocks has less then one million dollars in cash. A potential secondary offering is in the cards.
Ownership
Insider ownership of SG Blocks stands at 48%.
Worth noting, The Vector Group (VGR) owns 8.6% of SG Blocks. Besides running the fourth largest U.S. tobacco company, Vector Group controls a majority stake in Douglas Elliman, the largest real estate firm in the NYC area. I see potential synergies between SG Blocks and Douglas Elliman, but none compelling enough to see a future tie up between the two companies.
Conclusion
There is no sense in attempting to peg a projected value to such a volatile stock that gives limited visibility in its future financials. However, I like the story behind SG Blocks enough to buy a small amount of shares and treat it as a lottery ticket. Also, if all goes according to my master plan, I anticipate being a customer of SG Blocks in the future.

The Wall Street Fox utilizes fundamental and technical analysis to generate investment ideas. TWSF has experience as a buyside equity analyst, holds an MBA from Ithaca College, and is currently preparing for the Chartered Market Technician (CMT) designation. Please follow and share.

No Comment to " SG Blocks: Love The Company, Hate The Stock "