Here's What's Next For TransEnterix

Following disappointing, and equally surprising, 510(K) SurgiBot rejection news from the FDA, shares of TransEnterix dropped more than 65% in intra-day trading. The company said it will communicate its regulatory strategy regarding SurgiBot on its May 10th Q1 earnings call. Fear is high in this name, and this has magnified the sell off, thanks to retail investors heavily piling in to the stock because of a constant newsletter pump from January to March by Money Map Press (to be clear, TransEnterix was not behind the pump/did not compensate anyone for the newsletter pump).

So, what's next for TransEnterix?

As of February 29th, TransEnterix had $47.1M in cash, expected to last until early 2017. The company also has a $44M ATM in place, meaning that the company can raise funds at any time by selling shares directly into the open market. I would suspect that following the 200%+ run in shares from Jan - April, the CFO took advantage of the stock price and raised capital via the ATM. TransEnterix does not need to raise capital funds until late 2016/early 2017, or mid 2017 if the CFO took advantage of ATM, so I would not expect dilution at current stock price of ~$2.00. At $1.8M + ~$400K in a reusable instrument set, a few ALF-X sales would also mitigate cash needs.

From Stifel's Rick Wise, "With some level of cash-conservation, we believe TRXC can fund operations for 18-24 months."

TransEnterix acquired the ALF-X last year from Milan-based SOFAR for $25M in cash, $~40M in stock, and a potential ~$31M in milestone payments. While bears believe that ALF-X is a dud because there have been no sales since the robot obtained CE Mark in 2011, the fact is that ALF-X was in the hands of a small pharmaceutical company that could not afford the costs related to the infrastructure build out/marketing of a multi million dollar surgical robot even in front of surgeon interest, therefore, SOFAR focused on going the pharma route by conducting two human trials with hundreds of patients, collecting data, and publishing results in peer reviewed journals.

Intuitive Surgical acknowledged during its Q1 earnings call that a slow down in sales of the da Vinci system in Europe was directly due to hospitals now reviewing the ALF-X system before making a decision. One ALF-X sale represents the same revenue of ~4 SurgiBots. An ALF-X sale in Q1 of 2016 would be a positive surprise and boost the stock price, but it's a stretch given that the capital sales cycle for surgical robots is 6-12 months. I'd expect the first ALF-X sale to occur in Q2 or Q3. 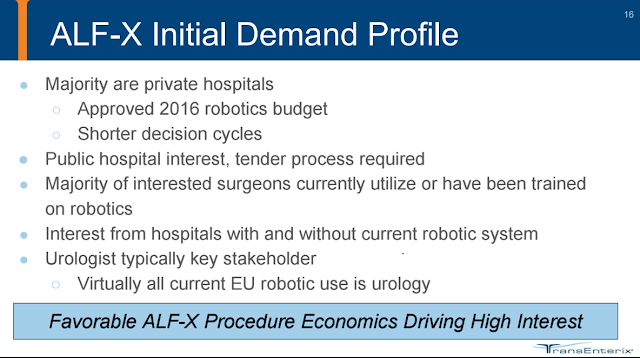 Europe has nearly double the amount of hospitals than the U.S. and surgical robotic market penetration is less than 1% in Europe, compared to ~5% in the U.S. The main reason why Europe hasn't adopted surgical robotics as quickly as the U.S. is because there is bigger scrutiny on costs/economics on a per procedure level. ALF-X per procedure costs will be $500-$700, compared to $1,500-$3,000 for da Vinci. 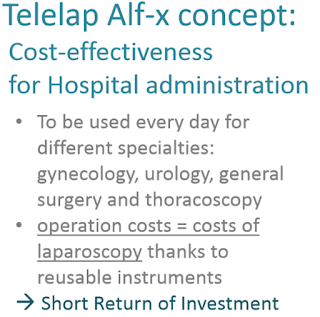 Public hospitals in particular must go through a tender process, which means they must evaluate all potential product options when buying $1M+ capital equipment. Any public hospital that is interested in acquiring a da Vinci robot must now thoroughly review the ALF-X robot before making a decision. 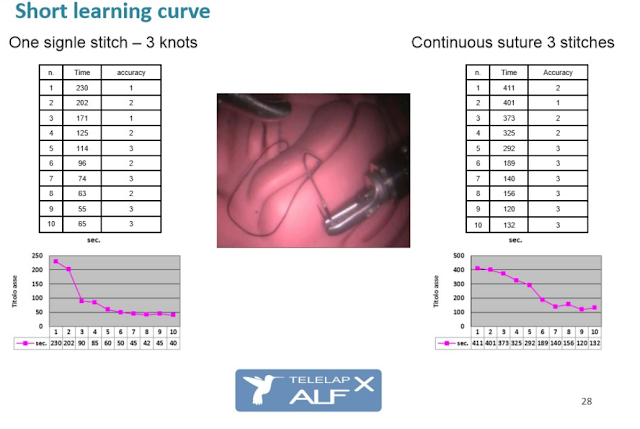 ALF-X boasts favorable per procedure economics, which is essential to European hospitals, haptic feedback, 3DHD vision, an eye tracking system, and an open architecture platform where the surgeon is scrubbed in. These are the differentiators between ALF-X and da Vinci--but make no mistake, ISRG is a behemoth and directly competing against them won't be a walk in the park. Either way, the market potential is large, barely penetrated in Europe, and the ALF-X system addresses all the needs that have hindered the adoption of surgical robotics in Europe. Most analysts covering TRXC expect 3 ALF-X system sales in 2016.

From BTIG's Sean Lavin, "We spoke to one surgeon who was seeing the product (ALF-X) for the first time. His multiple centers own over 20 da Vinci units. When we asked him how many of his next 10 would be ALF-X, he said all so long as when he demoes it he feels it drives well (which we think it does)."

SurgiBot is not dead, even though the stock is acting like it is. Shares of TransEnterix have behaved as if SurgiBot was a pharma drug that just failed its pivotal phase III trial. This is not the case, and TransEnterix has several pathways to commercialization for the SurgiBot.

First, some background. SurgiBot was submitted via the 510(k) pathway, which is an expedited pathway to approval that bases the product on a predicate device that is similar and already approved/marketed in the U.S. SurgiBot's predicate device was SPIDER, a laparoscopy device developed by TransEnterix that utilizes the same flexible instrumentation found in SurgiBot (internal triangulation, full 360 degree movement etc). SPIDER was used in 4,000 operations. The FDA signaled to management that human trials would not be necessary for SurgiBot approval and that instead they could use the SPIDER data as a predicate device.

One reason why 510(k) applications receive "not substantially equivalent" designations is because of "New Technology" -- the technology (in this case, SurgiBot) is not substantially equivalent to the predicate technology (in this case, SPIDER)." This makes sense, as the SurgiBot is a massive upgrade to the SPIDER, as SPIDER is manual and SurgiBot has motors and a plethora of other moving parts not found in SPIDER.

TransEnterix can instead take the De Novo reclassification pathway, which requires the company to submit an application that shows SurgiBot is not as dangerous as Class III devices and instead is just as safe/comparable to Class II devices. For reference, Intuitive Surgical's da Vinci is classified as a Class II device. TransEnterix needs to submit the application within 30 days of April 19th. It is a 120 day review process, meaning TransEnterix can hypothetically have SurgiBot on the market before years end. IF that's the case, this 65% decline will prove to be a great buying opportunity. 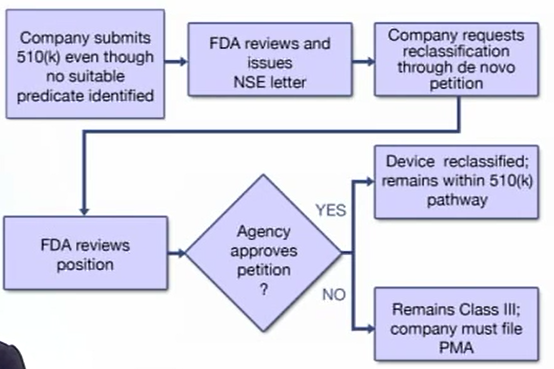 However, if the FDA decides that SurgiBot needs to go through the lengthy PMA approval process, SurgiBot will not be on the U.S. market for 1-2 years, and last week's price action was appropriate. If this turns out to be the case, it is my opinion  that TransEnterix should conserve cash and ditch FDA approval prospects in the near term, and should instead seek European CE Mark for SurgiBot, which is a less rigorous and time consuming process than the FDA, and focus on ALF-X sales in Europe. TransEnterix can build out its commercial presence in Europe/Middle East, collect data from the procedures, and submit that data for the PMA approval process.

We will have a clearer picture of what TransEnterix plans to do on May 10th.

I don't think this happens, but anything's possible. Maybe 5% chance, tops. But, worth noting the connecitons. CEO Todd Pope was a former J&J exec while serving as the President of Cordis. J&J signaled that they are looking to acquire medical device makers, and even though they teamed up with Google to develop a surgical robot, that is still years away from hitting the market, where as TRXC already has ALF-X on market and SurgiBot is closest robot to being approved. Meanwhile, a director of the board, Dr. Jane Hsiao, and her business acquaintance Dr. Phillip Frost collectively own 8% of TransEnterix, fueling speculation that Opko Health could take over TRXC. Meanwhile, the surgical robotics industry is projected to more than triple over the next five years and a number of healthcare companies will be looking to cash in (Stryker, Medtronic, EW, BSX, SNN etc).

TransEnterix is heavily owned by insiders and the VC's that funded the company when it was private. It is worth noting that not one VC has sold shares of TRXC since the company went public via a reverse merger in late 2013. Collectively, the board of directors of TransEnterix owns nearly 50% of the company.

TransEnterix suffered a disappointing setback last week, but the company is not a one trick pony. Commercialization of ALF-X is underway in Europe, and SurgiBot will eventually be approved by the FDA. I expect shares to remain in the low $2.00 range until management gives its update. I will continue to generate income on my underlying investment by selling covered calls. I have been long TRXC since it was SafeStich Medical on the OTC board in 2013. This is a speculative investment, do your own due diligence.

28 comments to ''Here's What's Next For TransEnterix"