I originally discovered Titan Medical when I was studying Finance and Management. At the time, I was taking a small business/start up class and gave numerous business pitches to peers, professors, and eventually venture capitalists/angel investors. The start up pitches we were presenting were riddled with the generic TAM SAM SOM diagrams and a lot of dialogue regarding market size, trends, and potential. "If we can capture just 1% of the total addressable market, we will be a multi billion $ company." Sound familiar? Less focus on the product, management, and strategy that would be implemented to execute on the idea, and more focus on potential, potential, potential.


Titan Medical reminds me of those presentations. Probably because Titan Medical has been a research and development company for nearly a decade and continuously touts the vast market potential on its website and during conference calls/presentations, but fails to execute on its strategy. The company originally spent its first 5-6 years developing the Amadeus, a multi port surgical robot meant to compete with Intuitive Surgical. Amadeus was scrapped, and while I could not locate an official reason as to why Amadeus was shelved, I've heard patent infringement of ISRG's da Vinci was a possibility.  Development of the SPORT has been going on since 2012.

When I first discovered Titan Medical, I saw the potential immediately. A single port surgical robot that would be cheaper, smaller, and more mobile than Intuitive Surgical's market dominating da Vinci.  Practically identical to my bullish thesis on TransEnterix, which has yet to pan out. But I soon realized there were stark differences between Titan Medical and TransEnterix as I diligently followed the moves by management of both companies.

Put simply, management at Titan Medical is inept. Given its current state, Titan Medical should either be a private company and continue to develop its surgical robot at a snails pace, or management should get serious, conduct a reverse split and uplist to a major exchange, which would allow them to receive Wall Street analyst coverage, and more importantly access a massively larger capital market than the TSX/OTC, which would enable them to raise a substantial amount of cash at an attractive valuation, rather than raising $10M in small placements with private, sometimes unnamed investors on a frequent basis.

I am long TransEnterix, and have no position in Titan Medical, so I am biased. But let's just lay out some facts and point out the red flags I see at Titan Medical.

1. Dennis Fowler, an executive at Titan, said this in a 2015 alumnus update:

"Alternatively, interactions with investors and traditional board members is often frustrating because their focus is exclusively financial, and they don't always fully understand the potential clinical and human impact of what we're trying to do."

I don't think any executive of any public company should say this in a public setting.

Dr. Fowler is responsible for clinical affairs and Titan’s regulatory approval process plan, including its pre-clinical and clinical testing strategy. He works closely with the clinical regulatory department of Ximedica, a medical products development firm, in solidifying Titan’s clinical strategy for the regulatory review and approval by the FDA and by the EU of the SPORT.

Here's another quote from Fowler that would worry me as an investor in Titan given that Fowler is responsible for preparing the FDA 510(k) submission for SPORT.

"Although obtaining regulatory approval for marketing the robotic technology is the responsibility with which I have the least experience, I have enjoyed learning about this and embraced the challenge."

In no way am I trying to attack or disrespect Dr. Fowler. He is a respected surgeon who has had an incredibly successful career and is the co-inventor of the underlying SPORT technology, which is impressive. I appreciate his candidness and I don't think he expected any investors to see that update directed to his Alma matter...damn internet!

I am simply questioning whether this is the appropriate person to have in place for charging Titan's regulatory approval process. Keep in mind, TransEnterix disclosed that their 510(k) submission for SurgiBot was more than 11,000 pages long, they had a couple executives with experience submitting successful 510(k) applications and/or working at the FDA evaluating 510(k) applications, and their SurgiBot application still got denied. This is no walk in the park. Perhaps Titan should outsource this work to an experienced third party that submits 510(k) applications on a regular basis, similar to how they outsourced the entire development of the SPORT to Ximedica.

2. Titan Medical recently published a discounted cashflow valuation summary of itself on its website. I have never seen a public company do this before. To me, it reeks of desperation and is an example of poor judgement by management to post this on their website. According to Titan Medical, under a series of assumptions, its stock could be worth $4.02 per share, representing a more than 500% increase from current levels. The work was done by Next Level Analytics, a consulting firm that specializes in modeling and analytics. In my opinion, this was a poor use of Titan's resources. 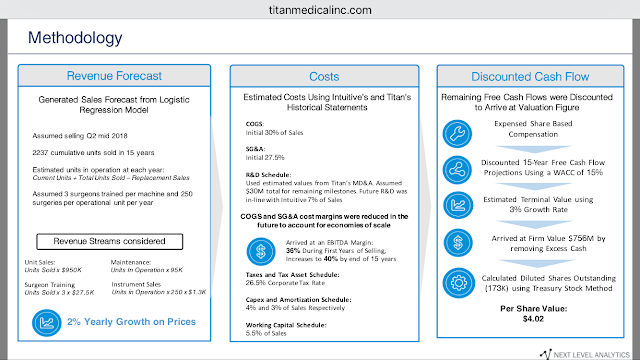 Titan must be really itching for some Wall Street analyst coverage. Gives itself price target of $4.02 (500%+ upside).

The problem I have with this valuation table, besides it being posted to the company's website, is that it assumes a possible scenario where Titan sells over 2,000 SPORT units and only has 173M shares outstanding. As of March 31, 2016, the company had 145M total diluted shares outstanding, and the company will need hundreds of millions of $ to finance its forecast of selling 2,237 SPORT units in 15 years. Titan has 72.5M warrants outstanding, at strike prices as low as $1.00 and as high as $2.75, with the potential of bringing in $119M in proceeds. Definitely a nice chunk of change if all of the warrants are exercised, but not enough to finance the assumption in the valuation model, and even if it was, that would bring total shares outstanding to ~218M, not 173M.

Consider this: Titan Medical has ~$14M in assets as of March 31, 2016, and requires an estimated $24M to fund its 2016 goals of initiating and completing human factors and usability trials. With an expected $8M to have been spent in Q2, that leaves Titan with only $6M at the end of Q2. The company needs to raise at least $10M ASAP. The company announced it would receive a $16M investment from a Chinese firm in June, and expected the first part of the deal to close by June 30th. However, Titan announced that at the Chinese firms request, the closing of the deal be delayed to mid August, and they will evaluate any offer from other interested parties, which is not a good sign. Hopefully Titan can complete the deal soon to continue its development of the SPORT system.

Titan Medical also expected a large investment from Long Tai, a Chinese distributor, but that deal didn't close as Titan announced in May a three month extension of the negotiating period. Why aren't these unheard of Chinese firms closing their investments in Titan Medical? Maybe because the stock price of TITXF is at multi year lows? 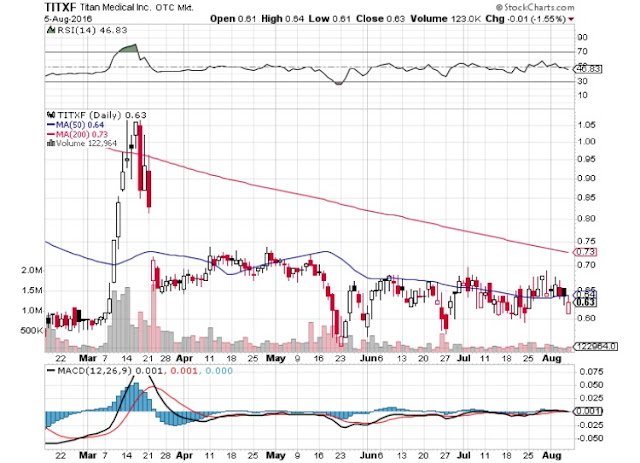 UPDATE: Titan has removed the valuation table from their website.

4. Titan Medical Insiders only own 4.48% of the company, and institutional investors are non existent. I'd like to see more insider ownership and some institutional holdings, alas, this should be expected for an OTC penny stock that has a history of missing expectations and consistently delaying timelines to commercialization. 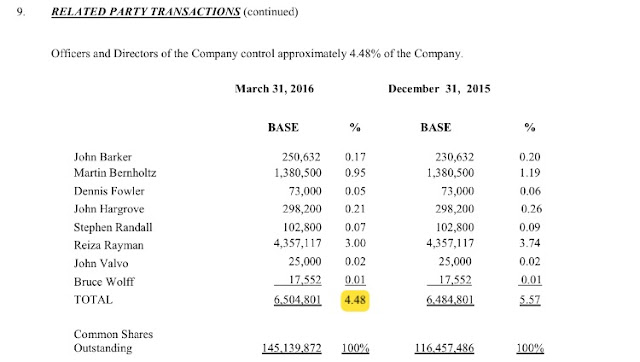 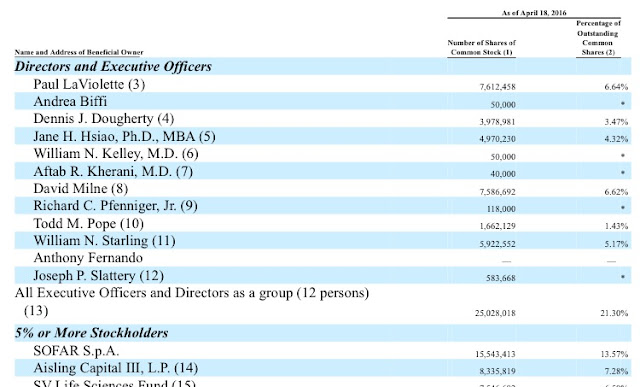 I am bullish on the future of surgical robotics. I think the first few market entrants to compete against ISRG will be able to take market share and thrive. There is room for more than one, two, or three players in the market place, and the SPORT technology is a contender. But at this point in time, given the numerous timeline delays for SPORT commercialization, and Titan's current status as an R&D company that is constantly raising money in small placements and diluting shareholders, I'm on the sidelines.

Titan doesn't expect to generate revenue until 2018, so there is plenty of time before SPORT hits the market to reevaluate Titan as a potential investment. That is of course unless Titan is acquired prior to commercializing SPORT, which is always a possibility, but it's never a good idea to invest in a company solely on the thesis that they will be acquired.

I'm more comfortable in investing in TransEnterix given the high quality of their management team, the fact that they have two compelling surgical robots that address different price points for different sized hospitals, and the fact that ALF-X is second to market and already has a sale under its belt (simply put, TRXC is now generating revenue and TITXF won't generate revenue for another two full years).

My advice to Titan management would be to conduct a R/S, uplist to a major exchange, and stop diluting shareholders in small private placements at an unfavorable valuation. Hopefully the new Chairman of Titan will realize this.

No Comment to " Four Red Flags At Titan Medical "