Coal has had a phenomenal 2016, with the Coal ETF (KOL) up nearly 200% YTD. This extraordinary performance followed a miserable 2015, which saw a number of coal giants file chapter 11 bankruptcy, trim the fat, and reemerge as a lean coal mining machine. Trump definitely helped boost the performance of coal, promising to bring back coal jobs and loosen environmental restrictions on coal plants.

That's all fine and dandy, but here's the thing: government can't revive a dying industry by loosening regulations when there are cheaper, cleaner alternatives out there. For one, the price of natural gas, coal's biggest competitor, is sitting near all time lows, and solar power prices have dropped to roughly the same price as coal in terms of electricity generation, and solar prices are showing no signs of stopping their violent fall.

So, fundamentally, the revival of the coal markets seems slim, and if it truly comes back, most of that may be priced in with the 200% increase in 2016. A number of the holdings in KOL are not profitable, and the ones that are profitable sport a P/E of more than 50x.

Technically, now may be a great time to short coal via the KOL etf.

On the weekly chart, KOL was decisively rejected at its 200 week moving average on heavy volume. The stock was overbought for ~6 months and is showing signs of breaking down. MACD looks primed to flash a sell signal. 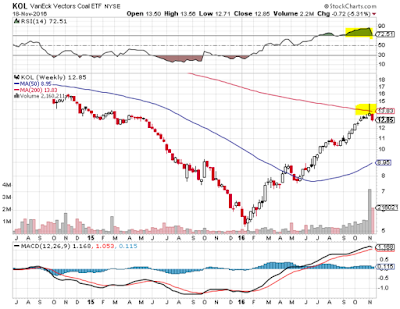 On the daily chart, KOL has flashed signs of negative divergence since the beginning of October, with the price rising but RSI and MACD falling. A spinning top was formed last week on heavy volume, showing signs of distribution rather than accumulation. I'd expect KOL to bounce off of its 50 day MA one last time before breaking down. KOL is a structural short that should take months to unwind. This first price target, after it decisively breaks below its 50 day MA, is $9 range, which is where the 200 day MA is, along with the 50 week MA. 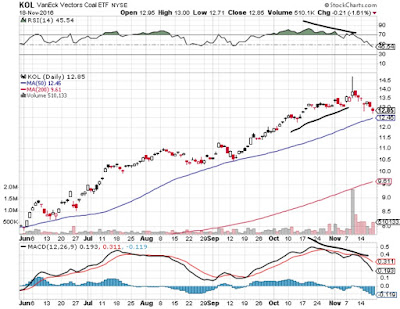 I believe KOL is a strong short candidate. Trump can't save the coal markets, and fundamentally, these companies are either not profitable or extremely expensive. I am currently short KOL and looking to sell calls or buy puts after it bounces off that 50 day MA one last time (hopefully).