On Friday the 13th, TransEnterix received FDA 510(k) clearance for their Senhance surgical robot, marking the first time a company will compete head to head with Intuitive Surgical’s da Vinci system, which received FDA clearance in 2000. The da Vinci robot revolutionized surgery and launched Intuitive Surgical from a $329M company on its IPO on June 30th 2000, to a $40B company today. 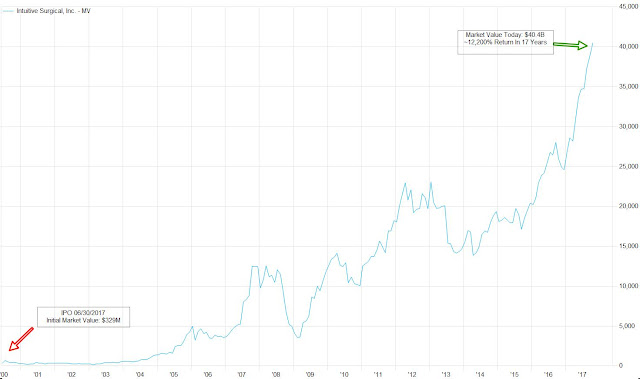 Just as it has been a long and bumpy road for Intuitive, same goes for TransEnterix. The North Carolina based company suffered a devastating blow in April of 2016, when the FDA denied clearance of their single port surgical robot, SurgiBot. The company had been developing SurgiBot for 3-4 years. Shares cratered nearly 90% over the following year. Fast forward to today and TransEnterix has received FDA clearance of Senhance, which is a robot the company purchased from SOFAR in 2015 for ~$100M in cash and equity.

Haptic feedback is a big deal. It helps the surgeon feel the stiffness of tissue being grasped by the robotic arm. With other machines, the surgeon has to rely solely on their eyes to gauge the resistance of tissues, organs and more.

Fun fact: Haptic feedback for the Senhance was made possible by Immersion Corp ($IMMR).

Intuitive Surgical has signaled that it is looking into haptic feedback and how to include that feature in future da Vinci robots. Intuitive opened up an R&D office in Raleigh in late 2016. ¯\_(ツ)_/¯

Technicals
Shares of TransEnterix soared 80% to $2.62 in after-hours trading Friday on 3.4M shares. Here are some technical levels to keep an eye out for, both short term and long term.
200 Week Moving Average: $3.03 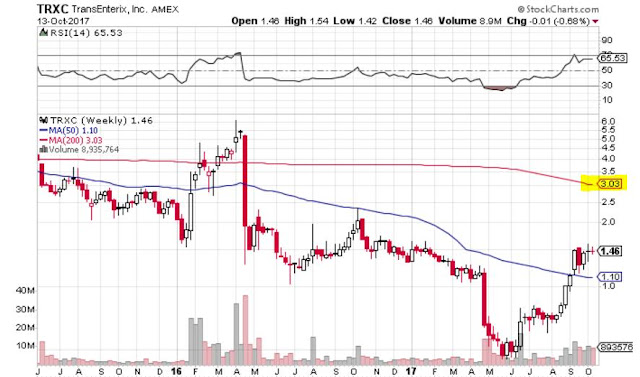 Sales of $1M+ surgical robots are lumpy, usually taking an average of 4-6 quarters for a hospital to initially test the robot to closing on a final purchase agreement. Any U.S. sales announced shortly after FDA clearance should be viewed as strong market interest in the Senhance robot. With TRXC’s European sales team now reaching an average tenure of 4-6 quarters, a few overseas sales announcement should not come as a surprise. A lack of European sales over the next two quarters should be viewed as weak market interest in the Senhance robot.

Conclusion
One thing is for sure: TransEnterix just secured pivotal 510(k) clearance for a potential blockbuster device that will be the first to compete directly with Intuitive's 17 year monopoly: da Vinci. Sales execution will dictate the stock price moving forward. Just like MAKO (Acquired by Stryker) and Mazor ($MZOR), expect a volatile ride ahead, a potential buyout, or a potential partnership with a large medical device company (see Mazor and Medtronic).

TransEnterix represents a legitimate threat to Intuitive's monopoly. If they didn't, why would Intuitive have already engaged in legal proceedings against TRXC in Europe? Case has been closed in favor of TRXC.

Additionally, ISRG's stock was down 6% at one point in after hours trading on Friday, and finished down 2%. That's $800M - $2.4B in lost marketcap for ISRG solely because of competition finally arriving.