We first glanced at Fuji Heavy Industries (FUJHY/FUJHF) stock back in 2011 after obtaining the 2011 Subaru Outback via a three year lease. We like practicing the "invest in what you buy/consume" philosophy. The stock was low, trading at approximately $10 per share (and $5 per share for FUJHF). Sadly, all we did was monitor the stock without making a move or doing our due diligence. It's OTC status and lack of liquidity were the main deterrents.

Fast forward three years, and the lease to the Subaru Outback has expired. Instead of buying out the lease/starting a new one, we decided to purchase/finance a used 2012 Subaru Impreza. Naturally, following our purchase, we revisited Fuji Heavy's stock and were shocked to see where it trades at today...$62 (and $31 for FUJHF)! Shares are up some 600% over that three year period!

First, lets briefly talk about the product. Our experience with both Subaru models has raised our standards for how a car should handle, drive, and maintain. These cars have plenty of pep, plenty of room, and are, depending on your standards, fuel efficient (87.5% of their 2015 fleet obtain 32+MPG on highway). The cars have some of the highest safety ratings in the industry and require very little maintenance. Reliability would be an understatement. Subaru has differentiated itself from the competition two ways: by offering symmetrical All Wheel Drive for its entire fleet, and by utilizing horizontally opposed engines (Porsche is the only other automaker to do so).

Ok, so there's the car salesman pitch. Go out and buy a Subaru, they're great cars, and this statistic being touted by the company in recent commercials hits the nail on the head: 97% of all Subaru's made in the last ten years are still on the road. I'm not sure how that stacks up when compared to competitors, but nonetheless, quite impressive. Now, what about the company?

When jumping into the financials of this company, I was surprised to see the spectacular growth that this company has been experiencing since 2011. The growth is best summed up in this image from the company's historical financials. 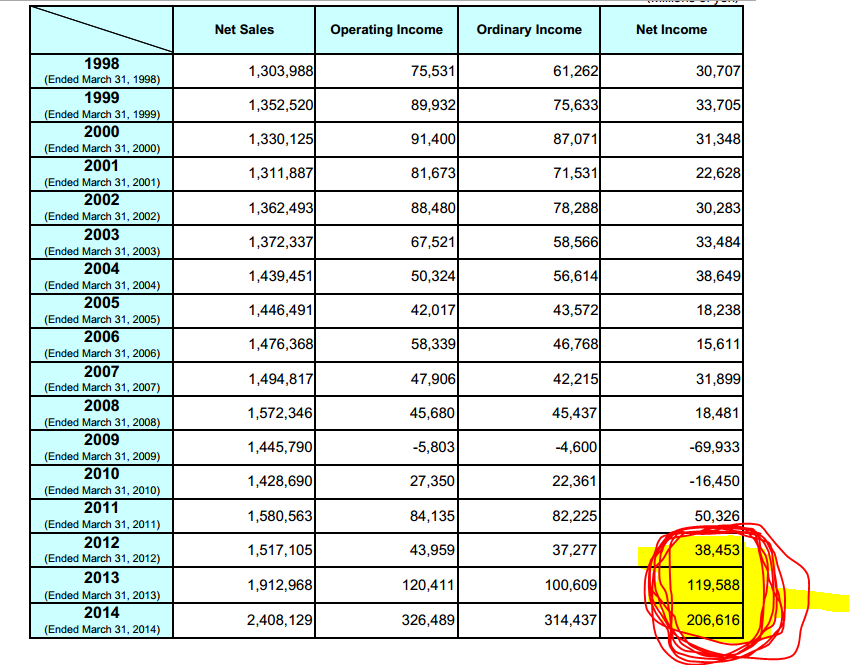 (In millions of yen)
From 2013 to 2014, revenues increased 26%, operating income jumped 171%, and net income increased an astounding 73% (enthusiastically highlighted above). Now, it is important to note that a solid chunk of that increase (about 70% of it) was due to favorable currency conditions, thanks to the yen dropping in value. The rest of FY14's increase was due to a 14% increase in total automobile sales, and a 40% increase in the aerospace division sales.

Subaru reached its management goals, to sell 850,000 cars annually by 2016, two full years ahead of schedule, but the company's current growth rates are not sustainable, almost entirely due to the drastic price action of the yen. Subaru has placed a new 3 year, and 5 year plan in place that calls for sustainable growth with a focus on quality over quantity. The company plans to sell 916,000 cars in 2015, and 1.1 million by 2020 (for a sense of scale, Ford sold 2.5M cars in 2013).

Quality Over Quantity (From Fuji Heavy IR Presentation)
We are not big in size as an automobile
manufacturer, and to continue sustainable growth in the
future, it is, of course, important for us to concentrate
our resources on our core competencies and offer
automobiles with Subaru’s unique appeal. But it is also
important, after a customer has purchased a vehicle and driven it, for the quality of the car, its performance and the after-sales service to make her/him feel that Subaru is really excellent and that she/he wants to drive another Subaru for the next purchase. To achieve this, we must never be content with mere “good” or “very good” ratings from Subaru users, but rather work to become “a prominent company” in their minds with an evaluation of “outstanding.”
While management is expecting slower growth rates moving forward, because of the notion that the yen will regain lost value after a steep correction, tonight's unexpected announcement of quantitative easing by the Bank of Japan, which will push the yen lower, will be a positive for Fuji Heavy and help sustain stronger than expected growth rates. 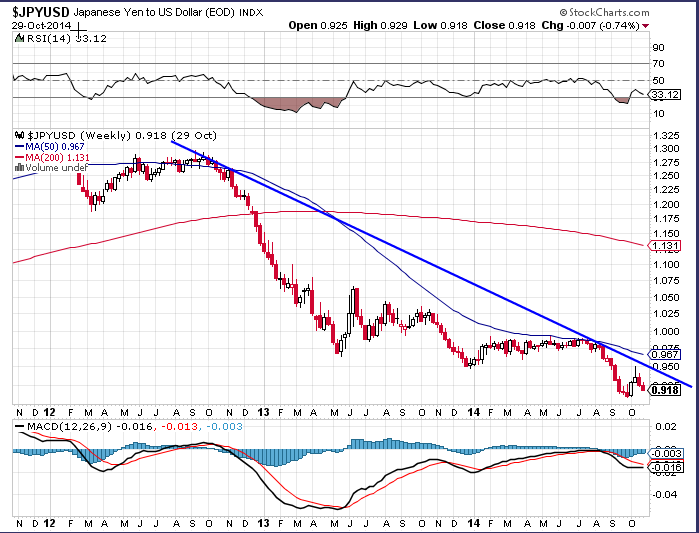 This is one ugly chart, and it just made a new six year low following the BOJ stimulus announcement tonight. It's currently at .903. It should continue its trend lower (which is great for Fuji Heavy).

Due to Subaru's growing popularity, (Sales Manager at local Subaru dealer indicated that they can not get their hands on enough 2015 Outbacks and Foresters, expecting shortage until early 2015), and the upcoming introduction of the next generation 2015 Impreza, rumored for introduction in December 2014 (each "next generation" release of Impreza has led to record sales numbers), we expect Subaru to beat its 1.1M in annual car sales goal well before their 2020 target (expecting around 2018).


We believe Fuji Heavy is trading at a steep discount when compared to its industry peers. Below is a comparison of a few competitors current market cap. Subaru, which sold 850,000 cars in FY2014, is valued $5B less than Tesla, which is selling approximately 25,000 cars per year (albeit at much higher prices than Subaru, and Tesla is a cult/hyper growth story so lots of hype). **Keep in mind this chart below % change in net income is not a fair representation due to the Japan automakers large currency gains from the decreased value in the yen. 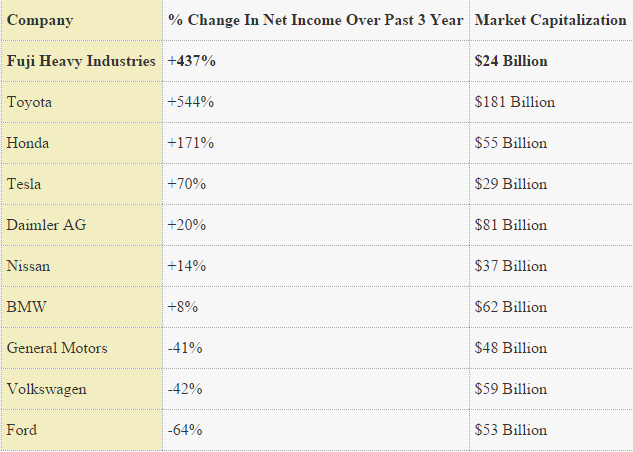 Here is a look at September YTD auto sales in the U.S., with Subaru being ranked as the 9th overall brand. 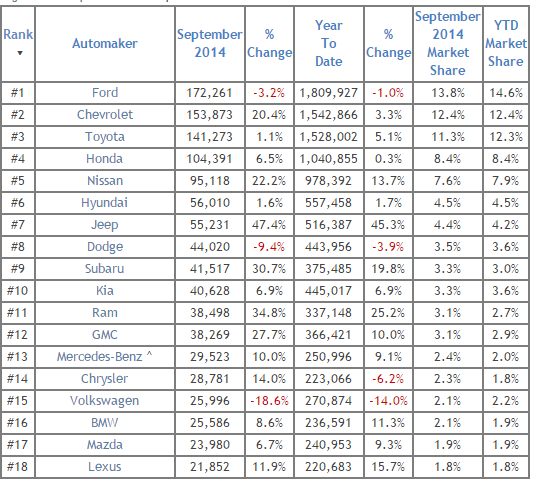 Subaru continues to post impressive growth numbers in the U.S., and they still have plenty of room to stretch their legs. With only 3.0% of the U.S. YTD market share, the company is looking to expand that number by strengthening the U.S. Subaru brand and introducing a fuel efficient SUV model (good timing considering strong SUV growth rates currently).

We think Subaru is striking a chord with families, which it is heavily targeting in its advertising. Here's an ad that we think illustrates one of the many reasons why Subaru is succeeding.

Ok. So to recap, Fuji Heavy offers a solid auto brand, is posting strong growth figures in its financials and auto sales, and is doing a great job with its advertising. The company does ~$24 Billion in annual revenue and is currently valued at ~$24 Billion. The company is posting strong growth rates and is far outpacing most** of its competitors. But wait, there's more.

Fuji Heavy also has an aerospace division that serves as a defense contractor to the Japanese government. While this division only represents 5% of the company's annual revenue, we think that number is going to grow dramatically by 2020, and article screenshots below explain why.

Fuji has been a longtime manufacturer of parts for Boeing's airplane models and that relationship is growing as Boeing grows.

This excerpt from an article in the Japan Times on October 10th points to the possibility of tremendous growth for Fuji's aerospace division. There seems to be a massive shift in Japanese policy occurring which would allow Fuji Heavy to become a substantial defense contractor not just for the Japanese government, but for others around the world now that Abe is trying to facilitate a domestic weapons export industry.

A few more notes to wrap it up. Fuji Heavy pays a dividend. Fuji Heavy's Industrial engine business provides engines and parts for Snowmobiles, ATVs, Generators, and more. This business unit is posting flat growth, but management is expecting growth in coming years. One large client of Fuji Heavy for this business division is Polaris Industries (snowmobiles). Toyota purchased a 16% stake in Fuji Heavy in the mid 2000's. Fuji Heavy has OTC american ADR as FUJHY at $62. This OTC is more liquid than FUJHF, but you can gain exposure either way, and both have very low liquidity. 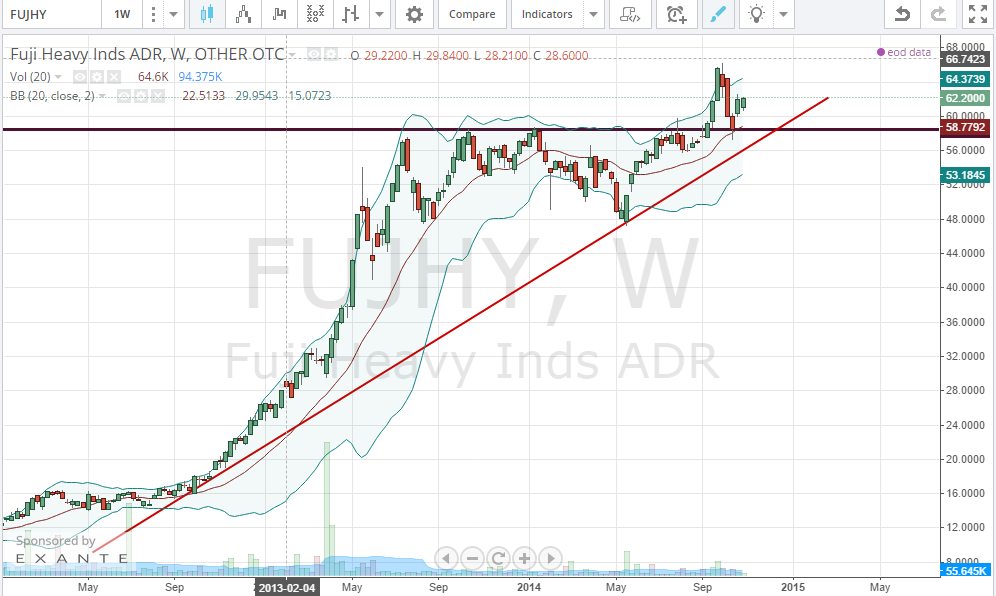 We hate buying stocks at new multi-year highs, but with the recent breakout above resistance, and old resistance successfully becoming new support...and the new stimulus from Japan...and the dividend....and the strong fundamentals, we feel compelled to nibble at this security in small bites and build up a position over time. We will be purchasing our starter position in FUJHY beginning tomorrow, and will be holding it for a long, long, long term investment horizon.

Possibly what impressed us the most when investigating this company, is the managements presentation of their data and the 2020 growth plan they have in place which is all presented on their corporate website. If you want to see the presentation PDFs and see where we sourced our data, here they are:

We feel the OTC status of Fuji Heavy's American stock listing is what has been deterring U.S. investors to jump in, and therefore, it's under owned. However, we don't expect this to change, as the company has signaled no intentions to uplist their ADR's to the NYSE or NASDAQ, and the avg trading volume of these two stock listings is under 15,000 shares.

*FUJHY just released Q2 earnings a few hours ago. We will review the earnings and see if there are any material updates to be included.