Our Largest Position Is TransEnterix, Here's Why

TransEnterix (TRXC) is our largest position, and we explain why below. First, it should be noted that our investment horizon in this name is very long term (2018+), this is a small cap speculative and risky stock that is subject to volatile price swings, and collectively as a group (including friends/family members), we own nearly 30,000 shares, so we benefit greatly from price appreciation and we have a bullish, positive bias in the name.
e.
We first initiated our position in the summer of 2013 when TransEnterix wasn't TransEnterix, it was SafeStitch Medical (SFES), a medical device company focused on minimally invasive procedures. SafeStitch was controlled by Phillip Frost and his affiliates, and we did very well investing in other Phillip Frost stock names (ROX, LTS, NVCN), so we took a blind stab at SFES.

In September of 2013, SFES conducted a reverse merger with TransEnterix, which was private at the time, and just like that, we became invested in an entirely new company that was also focused on minimally invasive medical devices. Shares quickly doubled and we sold our entire position.

But then we did some research into the newly merged company, and what we saw was, to us, a groundbreaking technology that held immense value. We quickly re-initiated our position, and ever since, we have been gradually adding more and more shares to the point where it represents upwards of 40% (rough estimate) of our entire investment portfolio.

Here's the first video we saw that showcases TransEnterix's technology and convinced us to immediately re-initiate our position, this video right here helped us understand everything about the company, its technology, and the market potential for its device, and this video here demonstrated how valuable TransEnterix's technology can be to patients undergoing general surgery. Thank you YouTube for enabling us to make investment decisions.

Now, notice that all of those videos are upwards of 3+ years old, what's been going on since then? TransEnterix's flexible SPIDER was sold as a disposable device for ~$1,000 that was replaced for every surgical procedure. After receiving FDA approval in 2009/CE Mark in 2010 and being on the market for ~3 years (to date, sold ~4,000 SPIDER's), TransEnterix received enough feedback from surgeons that warranted product development for a next generation device. That device is called the SurgiBot, and it will completely alter TransEnterix's business model for the better. This is an inflection point that warrants attention. The left pic is an early model of the SurgiBot, below is the final version. We strongly feel that this business model is the real game changer that will seriously accelerate TransEnterix's value once the SurgiBot is launched. We also strongly feel that the SurgiBot will receive FDA (510k) approval with no hiccups ~6 months after it files its submission to the FDA, which will occur in Q4 (we are estimating December to be conservative, which leads to approval in ~June 2015 and commercialization shortly after). These two factors, for us, mitigate a serious amount of risk, which is why we feel so compelled to consistently add shares to our position almost every single week (the RobinHood app lets us buy in small lots without the pain of commission fees, so we are constantly adding). Now why are we so confident? Because both of the assumptions we made above have been tested, and proven before.

Intuitive Surgical (ISRG) has the same exact business model, and they're growth (and stock price) resembled a hockey stick following its FDA approvals and commercialization in the early 2000's. This business model works, plain and simple. With regards to SurgiBot FDA approval, we think everything will run smoothly because the SurgiBot utilizes the same core technology as the SPIDER which was already approved by the FDA five years ago. TransEnterix is going by the books with pre submission filing/feedback from the FDA, the FDA signaled that the company will not have to conduct a human clinical trial to obtain approval, and TransEnterix will be able to include data from its 3,500+ SPIDER surgeries in the SurgiBot FDA submission filing. Having a former FDA medical device regulator as an executive employee doesn't hurt TransEnterix's chances of approval either. This company knows what it's doing.

CEO Todd Pope was the former president of JNJ's multi-billion dollar medical device unit Cordis, CFO Joe Slattery was former CFO of Baxano Surgical (BAXS), which is a near bankrupt medical device company that focuses on spine procedures, but before Baxano, Slattery played an instrumental role at Digene Health as CFO which was eventually acquired. COO Richard Mueller has extensive experience at launching successful medical devices, VP Mohan Nathan is a former Intuitive Surgical employee who is enthusiastic about communicating the value proposition of TransEnterix (he's in video above), and the list goes on. Not to mention, TransEnterix has the duo billionaire investment team Phillip Frost and Jane Hsiao behind them, along with ~6 health focused venture capital firms that funded the company when they were founded/still private. Institutional ownership has picked up also since the company was uplisted to the NYSE and included in the Russell 2000 index. Now let's look at a chart. 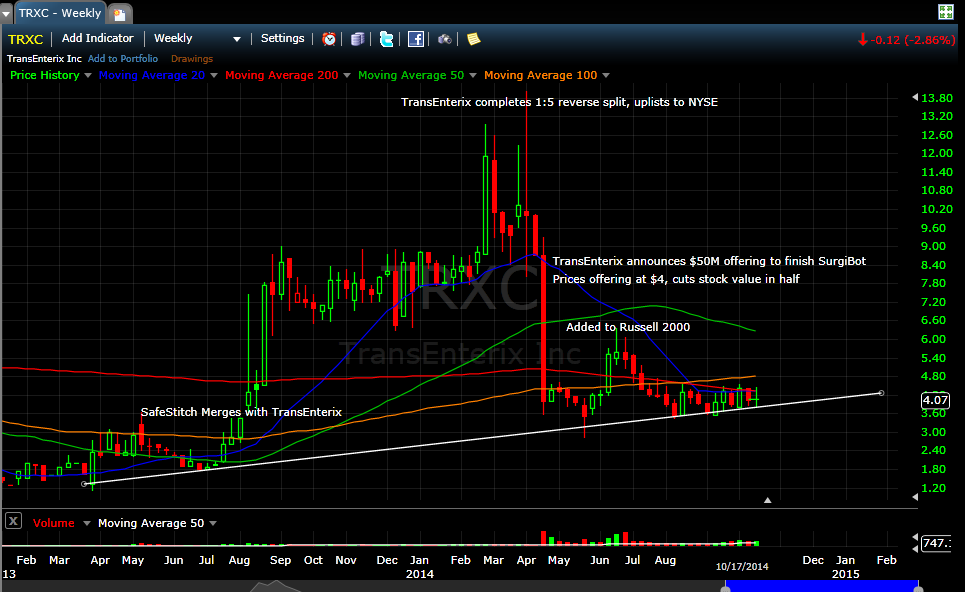 Above is the weekly. We see a gradual uptrend that continues to show (rising) support for the stock. 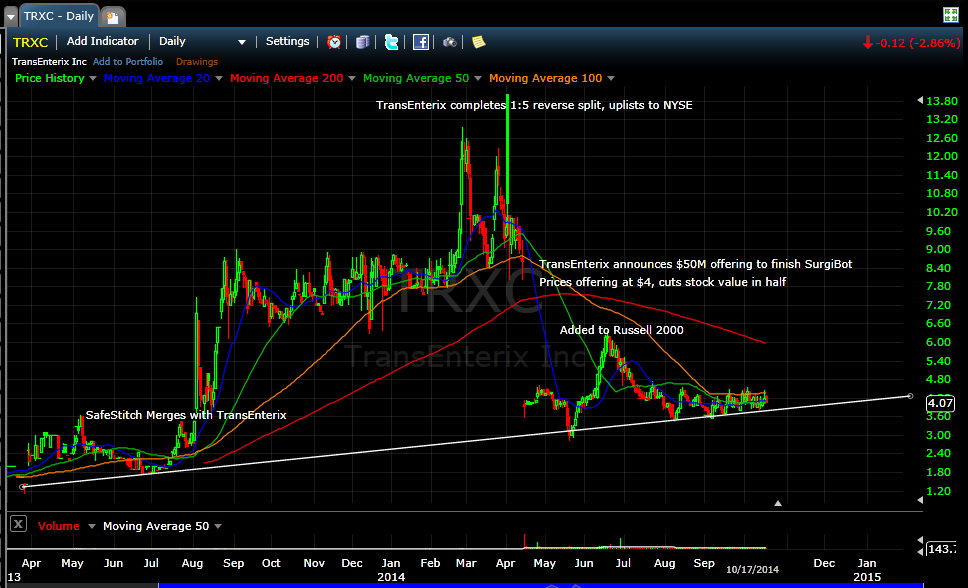 Here's the daily chart. We see a clear gap that we feel will eventually, inevitably fill at ~$8.50.

In our opinion, the chart doesn't look bad, we see a lot of sideways churning, and the moving averages are finally falling back near the current price level. And after dealing with that 50% drop back in April, we realized that our view in the company had not changed in the slightest bit, which warranted steady accumulation to bring down our cost average and increase our exposure. Now we simply view these $3.50-$4.00 ranges as a gift that won't last forever. Our current cost average, roughly (we own on multiple brokerages), is the mid $4's.

Why is the SurgiBot even a good buy for hospitals? What is the value proposition? The SurgiBot will cost a fraction of the $2M+ for ISRG's da Vinci device, the SurgiBot is mobile and easy to move between operating rooms, surgeons will conduct operations at the patients side and have full 100% tactile feedback while operating the device (not so for competitor devices), this expedites the training of surgeons for use of the device. The small profile of the SurgiBot allows for more bed assistants during the procedure, the small 25mm belly button incision reduces recovery time for patients and saves costs for hospitals. The SurgiBot provides strength, dexterity, and ergonomics for the surgeon, and the 3D screen with 3D glasses allows all bed assistants to have the same exact view as the surgeon when assisting during an operation, rather than the surgeon staring into a computer console 10 feet away from patient with the only 3D view.

There's a lot more positives to list off. TransEnterix has developed the first flexible ligating shears, which alone is a $2B annual market, and not only are these the first flexible tissue cutting shears, they produce almost zero plume and smoke when cutting through human tissue, which is unheard of. The company has a large IP portfolio and a strong legal team that is confident they did not infringe on any of Intuitive Surgical's patents, which all expire in 2014/2015/2016 anyway. The company already has a base of surgeons under its belt with the SPIDER device and they have some world renowned surgeons who are adamant about their product.

There are risks, JNJ announced they are looking to enter the Surgical Robotics market with their own device, and ISRG has released a single port version of their flagship device but it still carries a hefty price target, is bulky, and is not as flexible as the SurgiBot. TransEnterix is set to become the first true competitor of ISRG to hit the market, but there is another name, Titan Medical, which is developing a similar product but they are more than a year behind TRXC and we feel their competing product is inferior to the SurgiBot because it mimics ISRG's da Vinci in the sense that the surgeon is not patient side and is instead operating via a computer joystick console 10 feet away from the patient and has zero tactile feedback, which is an essential guide surgeons need during operations. The lack of tactile feedback is what has led to severe health complications and even death for patients under ISRG's da Vinci and these events have led to several lawsuits. Regardless of competition, the market is large and expanding every year and there will be room for more than two players. Other risks include the FDA blocking approval of the device (we don't think will happen) or surgeons simply opting to not utilize surgical robotics (we don't think this will happen).

Now, let's talk about hypothetical elementary stock valuation. Most of the Analyst's have an average 12 month $9-$10 price target, but longer term, how big can TransEnterix get? We think big. TransEnterix's market potential is 2M annual surgeries, their low price point allows them to penetrate smaller hospitals and private surgery practices that ISRG cannot enter due to their high pricing, and the company should be approved for multiple surgical applications, expanding its potential market. TransEnterix is currently worth ~$250M, while Intuitive Surgical has a value of $17B. If TransEnterix is valued at just a tenth of what Intuitive is, shares would be trading at levels of $27+ per share. If, over time, TransEnterix manages to grow and be valued at half of what TransEnterix is, shares would be trading at levels of $120 per share. Just some food for thought, obviously those types of valuations will TAKE YEARS AND YEARS to be realized by the market, but we think it is without a doubt in the realm of possibility. And for sh*ts and giggles, if TransEnterix reaches Intutive Surgical's current market cap of $17B, you're talking about a $270+ stock. We like to dream. (ISRG did it, they went from $10 to $600 over a 10 year period). 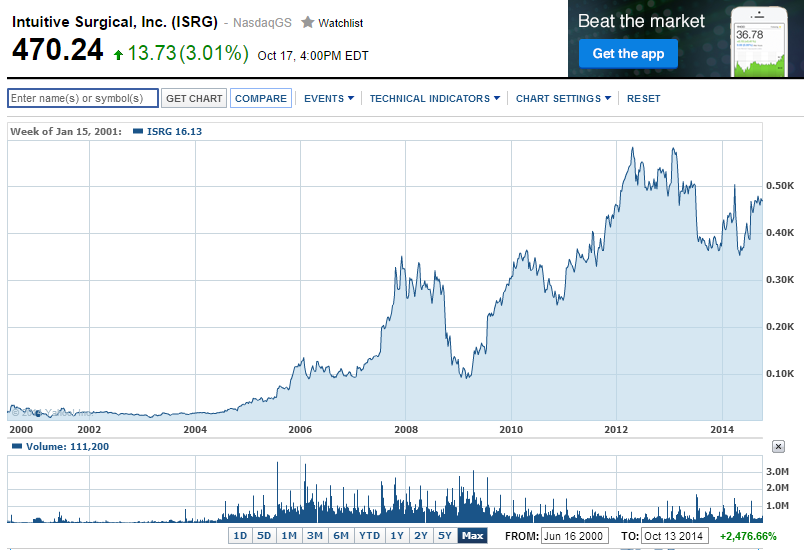 Thanks for reading our scattered thoughts, these are just our opinions and shouldn't be taken as advice

We have even more information written up in two articles that can be found under the Pro Research Reports tab above. We view this one as a clear long term winner. The company has 6 analysts covering the stock, (all buy recommendations) and we have access to two of those reports. Send an email if you'd like to view the analyst's view/projections.

No Comment to " Our Largest Position Is TransEnterix, Here's Why "