We feel Plug Power looks primed for a run, technically speaking. The stock has been in a consolidating range for six months, and with earnings just around the corner (Nov. 12th), the stock may stretch  its legs and go for a jog, as it has in the past prior to earnings.

We understand that Plug Power is a controversial, highly debated stock due to it's massive run up nearly a year ago. We will distance our selves from the fundamentals (we have a bullish bias, and remain long from Aug. 2013), and instead focus on the technicals. Let the chart do the talking. 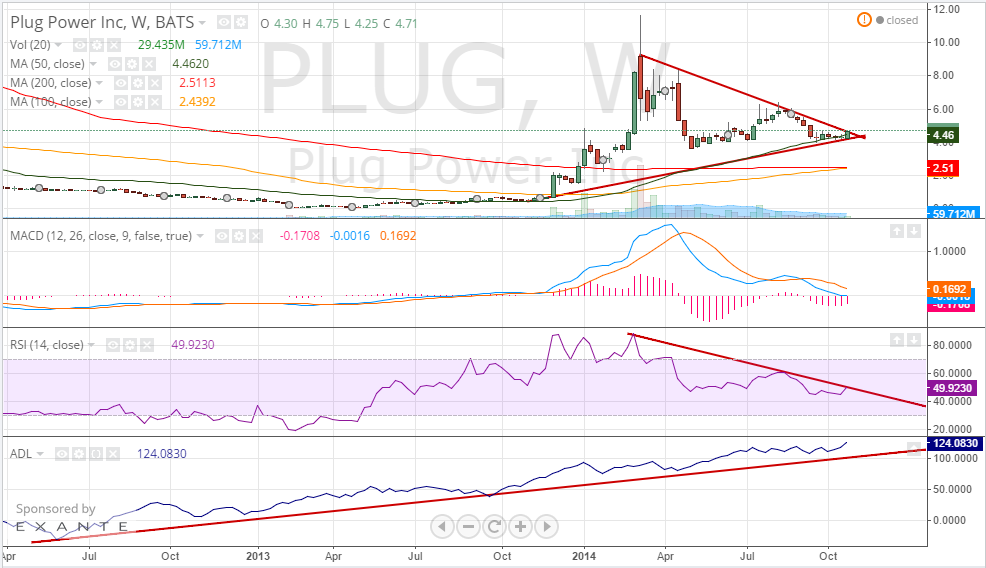 Here's the weekly chart. We see RSI running into resistance, and the ADL line reaching new highs. We also notice that the 100 MA is about to make a bullish cross above the 200 MA, as well as this recent week's price action reclaiming the 50 MA (currently at $4.46). If Plug breaks out of the ascending triangle, which it looks like it barely did on Friday, and if the RSI breaks above that downtrend, Plug should be ready to make a move higher. 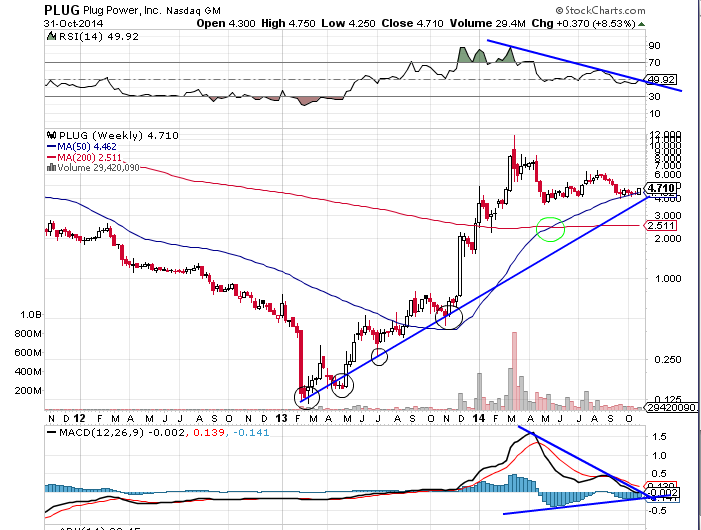 Here is another weekly chart, but this time utilizing a log scale. The upwards trendline looks a bit more defined, and it looks like the stock will be approaching that trend line next week. We expect the trend to continue its upward slope. 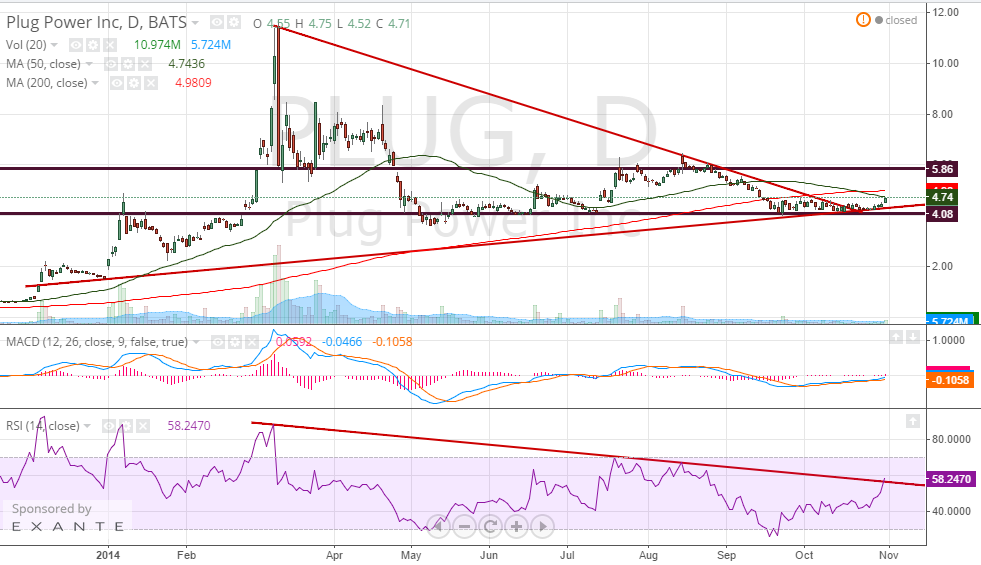 Here is the daily chart, with our interpretations drawn over. A few observations. RSI looks like it just broke out from a 7 month downtrend, MACD is nearly positive, and the stock is above the ascending triangle, and is bouncing off of its long term trend line. However, the bearish "death cross" has occurred, and the stock was rejected exactly at its 50 MA on Friday, at $4.74. Two bearish moves that deserve close monitoring and tight stop losses for the squeamish. 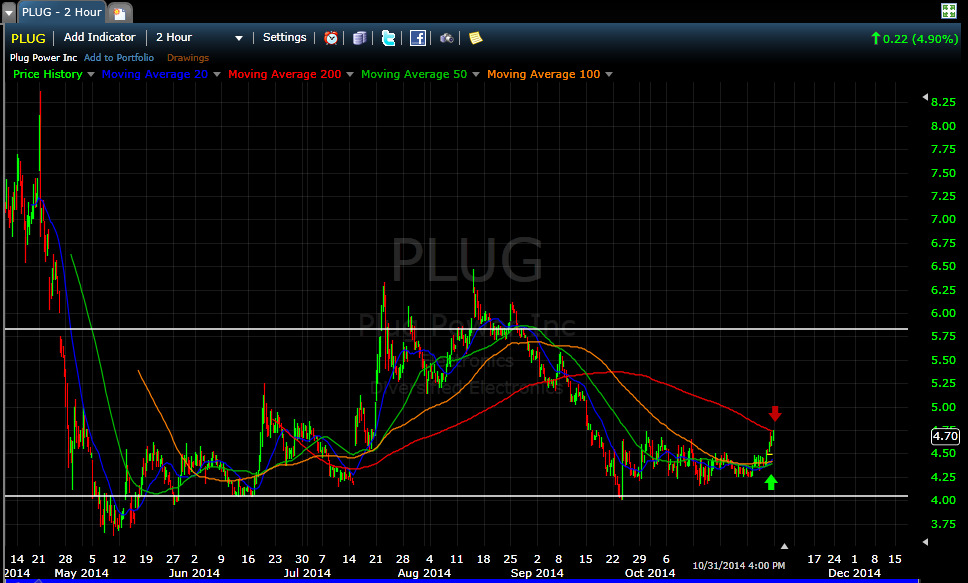 This chart is a 2 hour chart, and it illustrates the importance of the current $4.75 resistance level. The 2 hour 200 MA is at precisely $4.74, as is the 50 MA on the daily. If Plug closes above $4.75, it will present an appealing risk/reward profile with a tight stop loss set for the short term traders. Also notice the commencement of the upward slope for the 20, 50, and 100 MA's. 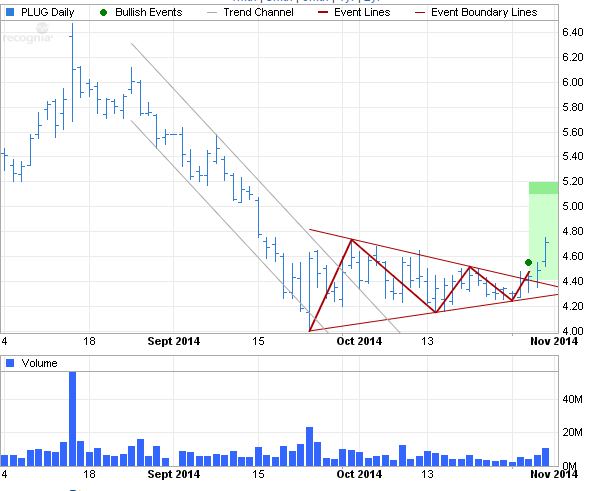 Lastly, this chart, courtesy of Recognia, detected a bottom triangle and set its near term PT to $5.10-$5.20 on October 29. Note the steadily increasing volume for the past 5 days. That needs to continue. *Not aware of the success rate of Recognia, but thought worth putting in, to support our bullish bias.

If you'd like to read more on the fundamentals of Plug Power, check out the research article tab above. We are expecting a slight beat on Q3 earnings numbers, but believe the real factor that will determine the direction of the stock price is more details about the supposed $30M order and who it's for, as mentioned during last earnings CC, and any potential orders for GSE's which are set to roll out in Q4.

We are long term with Plug via stocks, but are holding onto options for potential short term gains.

Posted by The Wall Street Fox at 8:29 PM