TransEnterix: How Big Can It Become

When looking at TransEnterix from a valuation standpoint, how big can it become in the next ten years? That's the question that will be tackled in this post.

But first, if you're not familiar with TransEnterix, here's a brief overview. TransEnterix is developing SurgiBot, a patient side robotic surgery platform that utilizes a single incision about the size of a quarter to conduct a broad range of surgical operations. SurgiBot allows surgeons to achieve internal triangulation with true left/right hand instrumentation, receive tactile feedback, and easily manipulate tissue and organs in a way that builds upon the laparoscopic techniques surgeons are already familiar with. SurgiBot will cost roughly 75% less than Intuitive Surgical's da Vinci System, and will have a much smaller footprint, allowing easy transportation between operating rooms. These features and more give TransEnterix a significant competitive advantage in the rapidly growing robotic surgery market as SurgiBot signficantly benefits hospitals, surgeons, and patients when compared to the current market offerings. 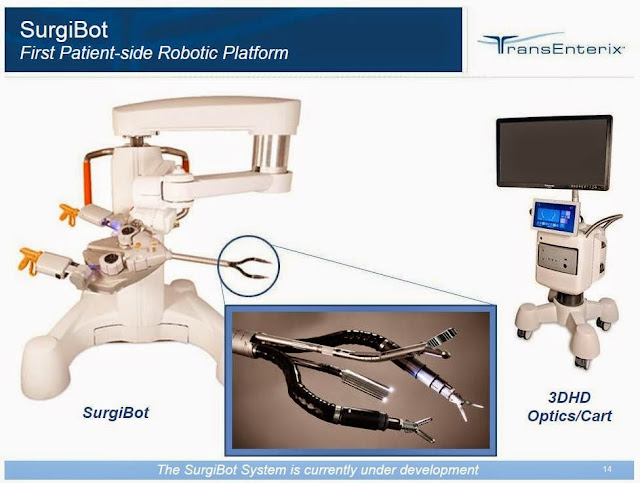 Here are some numbers to ponder:
$18 Billion is the size the robotic surgery market is expected to reach by 2020, and 12% is the estimated annual growth rate, according to one research report.

Robotics penetration in the U.S. general surgery market stands at less than 5%, which illustrates the infancy of the surgical robotic market and how much room is left to grow for participating companies.

The market value gap between Intuitive and TransEnterix is large, and it helps give a frame of reference for the potential valuation(s) TransEnterix may one day reach once it begins selling its flagship product. If TransEnterix reaches a valuation equal to a tenth of what Intuitive is worth today, shares would be trading north of $20, which includes an additional 25M shares being added to the current shares outstanding to cover the cost of expected growing pains. A valuation equivalent to Intuitive would equate to $180 per share. Given the number of problems SurgiBot solves in the operating room, $20 per share will be short lived once the market catches on, and $180 per share...nothing wrong with dreaming, right?

Obviously, those potential returns are years away from materializing, and EVERYTHING would have to go right for the SurgiBot in order for TransEnterix to reach such a staggering valuation, but this large value gap clearly illustrates the potential TransEnterix has to generate serious returns for its investors.
SurgiBot Commercialization

Management estimates that mature sales reps can sell 5-10 SurgiBots per year, which equates to each sales rep generating $2.5M-$5M in annual revenue. This figure does not include the recurring revenue generated from the annual service fee and disposable instruments.

TransEnterix has had two sales reps in place since early 2014, and CEO Todd Pope indicated that they plan to hire more during the second half of 2015. The company plans to have 15 sales reps ready for initial launch, and thinks 30 can cover the entire U.S.

The one time sale of the SurgiBot System will generate gross margins of more than 50%, while recurring revenue from instruments can obtain 60% gross margins with scale. In order to break even on the annual service contracts, scale will be needed. Sourced from slide 28.

There are plenty of unknowns. How quickly can TransEnterix ramp up sales? How quickly will the production team be able to meet demand? Only assumptions can be made at this point, but we can look at Intuitive's history for some guidance.

It took Intuitive Surgical ten years to reach $1 Billion in sales, and then three years after that to reach $2 Billion. I believe TransEnterix will experience faster revenue growth than Intuitive did, and not because the SurgiBot is mobile, includes tactile feedback, and has a price point that is severely lower than the competition, but because of the regulatory strategy the company is pursuing.

The fact that a road into the surgical robotic market has already been paved by Intuitive should also help expedite sales of the SurgiBot, as most of the market is now educated about the benefits of robotic surgery.
Valuation

RBC analyst Glenn Novarro believes that TransEnterix will take more than 10 years to reach revenue of $1 Billion, but will have a steeper initial sales ramp than Intuitive did, according to a May 2014 analyst report. Novarro assumes that TransEnterix reps will be able to sell an average of 4-5 units after launch. 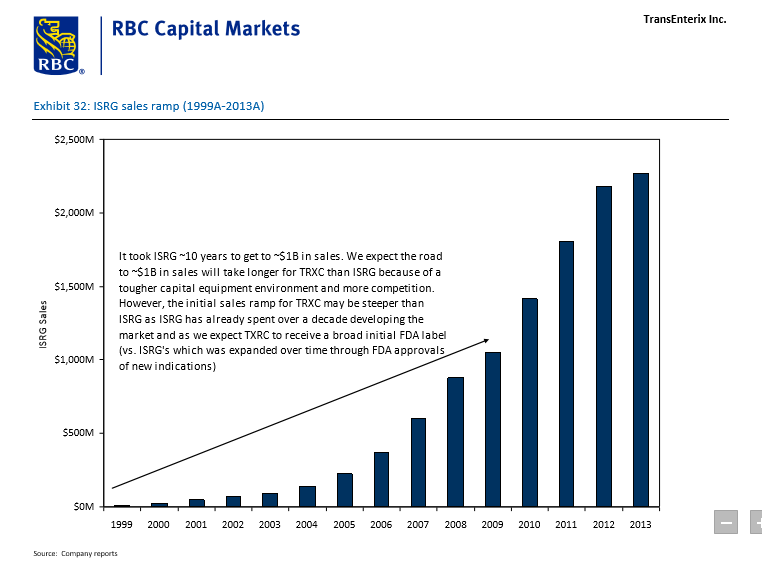 Let's break down the $1 Billion revenue figure for TransEnterix and estimate how long it may take.

Assuming TransEnterix will have 15 reps ready for launch in 2016, and 30 reps in 2017 and onward, along with a starting average of 150 operations being performed per SurgiBot with an annual growth rate of 12%, and 3 unit sales per beginning rep, selling an additional unit every year, here's when we arrive to $1B in annual revenue: 2025 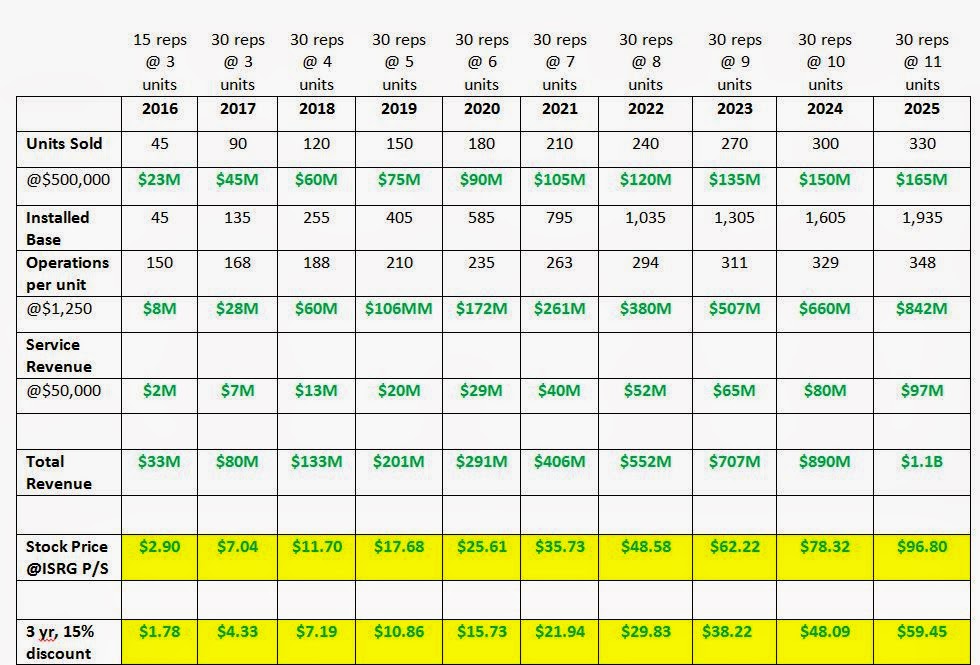 Please note: Above is an estimate. Anyone can make up their own numbers and assumptions. The model is a simple valuation estimate utilizing a P/S multiple of 8.8, the same as ISRG. For the extra conservative, I included targets with a 3 year, 15% discount rate. Includes a total share count of 100 million, to account for future equity raises. A valuation utilizing EV/Sales or a DCF model would be much more appropriate. I more so focus on the technicals.

The model above is conservative, but realistic....a realization that occurred after originally constructing a more bullish model and then referencing those projections to the estimates of three different analysts covering the company. My original bullish model assumed that new sales reps would be able to sell 5 units from the get-go and called for TransEnterix to reach $1B in sales by 2023, a total of eight years.

The model above solely contains sales within the U.S. and does not include international sales, which will provide meaningful upside potential to the above projection. TransEnterix has indicated that they plan to file for European CE Mark shortly following the U.S. filing with the hopes of receiving both approvals around the same time. FDA 510(k) approval is generally a 5-6 months process, while CE Mark is generally a 3 month process, so expect TransEnterix to file for CE Mark in Q4 2015.

Running several models with different assumptions helped me realize how much of a cash cow the recurring revenue stream from disposable instruments and annual service contracts is going to be, and how insignificant unit sales will be in comparison once SurgiBot's installed base scales. Once TransEnterix reaches profitability, which is expected to occur around $150M in annual sales, these recurring revenue streams will generate significant free cash flow that may be used for R&D, growth initiatives, acquisitions, or shareholder returns. Recurring revenue streams result in a predictable business, which is cheered by investors.

Whichever way you look at it, TransEnterix is poised for rapid growth. Hockey stick growth. 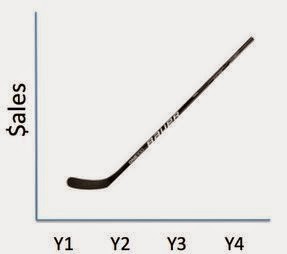 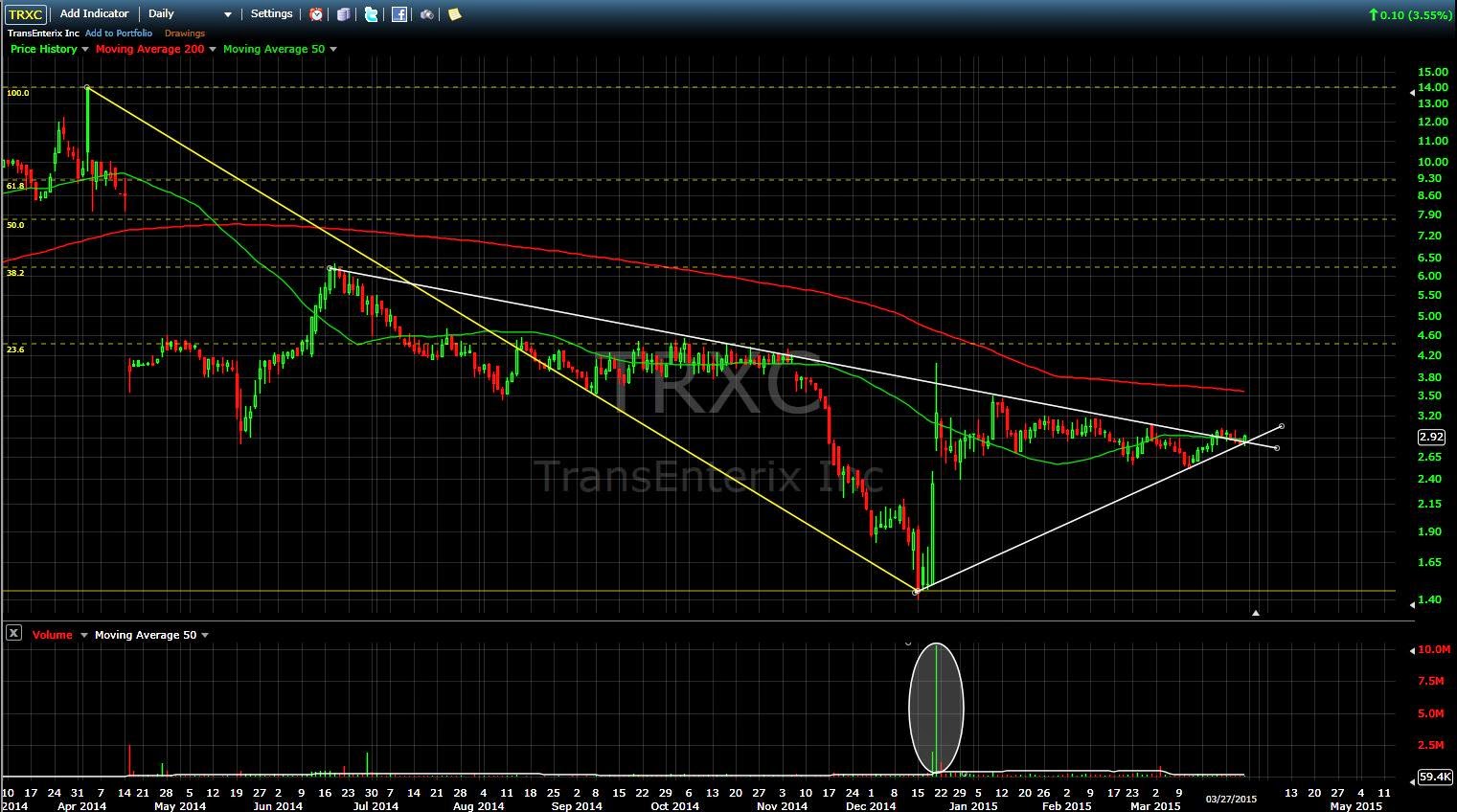 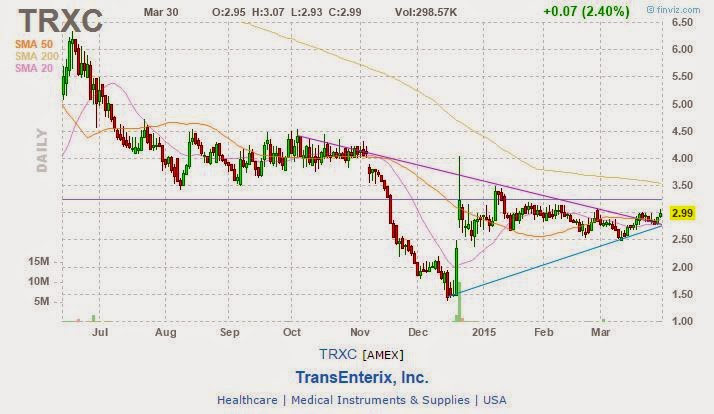 Last Friday brought news that Google would be developing the software for a surgical robot developed by Johnson & Johnson's Ethicon. This official step into the surgical robotic market only validates the large market opportunity that TransEnterix is pursuing, and puts more eyes on the industry and its involved players. Given TransEnterix's unique platform and 2+ year head start, one has to wonder which companies are keeping their tabs on them. Don't expect J&J/Google to be the last reputable companies to enter the surgical robotic market, and don't be surprised if TransEnterix becomes an acquisition target down the road.

Often I question my investment thesis behind TransEnterix...many times it sounds too good to be true...pie-in-the-sky...a pipe dream. But then I recall what David Milne, TransEnterix's first investor, had to say about SurgiBot in a MedTech article written by David Cassak. From the article:

Still, the decision to shift from a manual platform [SPIDER] to robotics [SurgiBot] wasn't an easy one to make. David Milne recalls the reaction of the board when Pope and his team presented the idea. "Our jaws hit the floor," he says, if for no other reason than that the capital requirements for developing a robot are so much greater than a suite of manual instruments. With a modest investment, the TransEnterix team took $50,000 and in only four months delivered a working prototype based on SPIDER instrumentation to the board. Says Milne, "It was the most interesting transitional board meeting I've ever attended. Suddenly something that seemed pie-in-the-sky was real."

TransEnterix is the real deal, and nothing besides time is stopping this company from becoming the next dominant player in the surgical robotic market. I am long TransEnterix and continue to add shares every paycheck, with a multi-year investment horizon.

3 comments to ''TransEnterix: How Big Can It Become"