The Evolution of TransEnterix 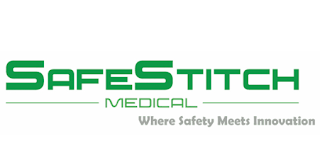 I've been slowly building a long position in TransEnterix since Summer 2013 when it was SafeStitch Medical (SFES) trading at $0.50 in OTC penny land. I stumbled upon SFES after researching Dr. Phil Frost of Opko Health and his individual stock holdings. It's not everyday you see a successful billionaire continuously purchasing penny stocks in the open market. Frost's penny stock holdings were a mix of shell companies and legitimate, although mostly struggling, businesses. I blindly followed Frost and picked up a few hundred shares of the SFES shell. (A rookie mistake; never blindly follow anyone, even a successful billionaire, into a stock without doing extensive research).
A few weeks later, the SFES shell was filled with North Carolina based TransEnterix via reverse merger. The stock more than tripled (lucky me) and an equity raise commenced. The more I read about TransEnterix and its technology, the more intrigued I was, the more stock I bought. I was lured by the fact that TransEnterix was poised to be the first true competitor to a company that had enjoyed a 15+ year monopoly in the surgical robotic market and had ballooned into a $20B+ company, Intuitive Surgical.

It's definitely a dangerous thought that wipes out most retail investors who are invested in speculative penny stocks: "If ISRG went from $5 to $500, imagine how high TRXC can go!" Nearly all stocks subjected to this type of thinking fail, and that remains a possibility for TRXC. But after two years of speaking with surgeons and sales reps, reading research reports, and diligently following company developments, I'm confident that TRXC's chances of becoming a success far outweighs its chances of failure. 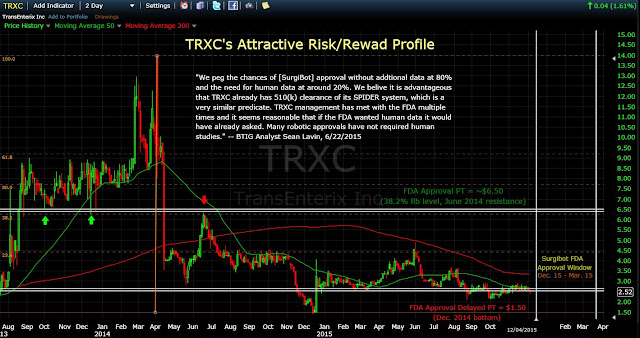 TransEnterix has come a long way since the SFES reverse merger in 2013. The company conducted a 1:5 reverse split and uplisted to the NYSE, submitted the SurgiBot to the FDA for 510(k) approval, presented at SAGES and several other health care conferences/exhibits, built out its workforce, and acquired the CE Marked ALF-X system for $99M.

But, there is still a long way to go. The company has no revenue, is burning cash at ~$7M - $8M per quarter, and will have to raise more $ in the future. If TRXC didn't utilize any of the remaining $18M in its active ATM offering, the company should have enough cash until Q2/Q3 2016. I'd expect management to take advantage of the potential share price volatility and raise $ after expected SurgiBot FDA approval news. The company doesn't expect to reach cash flow breakeven until late 2018, and it will take significant capital to scale this business into a worldwide surgical robotics player.

I was extremely skeptical about the ALF-X acquisition announced in September. A big strategic shift right before the pivotal launch of SurgiBot. Managing two different product divisions separated by the Atlantic Ocean and different language/culture (execution risk). A rather bulky footprint in the OR. The need to raise money sooner given the $25M cash paid. Those were my concerns. But then I watched every single YouTube video of the ALF-X (operations, surgeons interacting w/ ALF-X and their reactions etc.), read all of the clinical research on the robot, and spoke with a surgeon from UAE who used the robot. 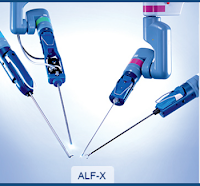 Now I'm convinced the ALF-X is capable of rivaling the da Vinci. ALF-X can handle complex procedures, set up time, docking, and procedure time is much faster than the da Vinci, per procedure costs are in the hundreds of dollars, not thousands, and the eye tracking software and haptic feedback are impressive, useful features. Watch this video to see the force feedback and eye tracking in action: https://vimeo.com/151949037

How TransEnterix managed to scoop up the ALF-X system for just $99M is beyond me, given that ALF-X is a serious contender to the da Vinci. According to Sean Lavin of BTIG research regarding the ALF-X acquisition:


"The story is bizarre involving a father passing away in Italy and two daughters wanting to put the device in the hands of a small innovative company. It’s also strange that the previous company didn’t ramp manufacturing to make sales even in front of doc interest rather taking the more “pharma” route of creating more data. All that said, it seems TRXC got an excellent deal."


All of a sudden, the thesis behind TRXC changed overnight with the ALF-X acquisition. Now TRXC has a surgical robotic suite that allows them to offer two systems at vastly different price points for different sized hospitals and surgery centers. $500K for SurgiBot, and $1.7M for ALF-X. One ALF-X sale represents the revenue equivalent to the sale of 3.5 SurgiBots. That is a game changer for TransEnterix and its future earnings potential.

Europe has been slow to adopt the da Vinci robot. They have 586 systems, compared to 2,300+ in the U.S. According to a former ISRG sales rep, the sales process in Europe is much more difficult than in the U.S., partly because of aggressive marketing tactics by ISRG that fare better in the U.S. than in Europe, partly because of the stress on economic value by European hospitals when purchasing equipment. Now, a surgical robot that is comparable to the da Vinci is on the market in Europe and it's per procedure model provides more economic value to hospitals compared to the da Vinci, and it was invented/made in Europe, which can only help (nationalism). Sounds like a hit to me.

TransEnterix is currently pursuing ALF-X approval in Asia, and plans for U.S. FDA approval in 2017. ALF-X is cleared for sales in the GCC (Bahrain, Kuwait, Oman, Qatar, Saudi Arabia, United Arab Emirates). ALF-X was received well at the recent Arab Health exhibit. TransEnterix's SPIDER has a strong presence in the GCC and the company has customer and distributor relationships to leverage with the ALF-X launch.

At the $99M price point, it's apparent that the ALF-X deal was a steal for TransEnterix... and for SOFAR. SOFAR is participating in all the potential upside of ALF-X through TRXC stock while limiting the risk. SOFAR holds 15M shares that are locked up for two years once the ALF-X acquisition closed. It seems clear that SOFAR wanted to sell the ALF-X to a company that would be laser focused and dependent on the commercial success of ALF-X rather than a large company that is less dependent on ALF-X success or may instead want to strip ALF-X for its valuable patents and integrate the technology into its own system.

Shares of TransEnterix more than doubled from its recent $1.50 low on a newsletter pump and takeover speculation. The J&J buyout rumors are rooted from a broad comment J&J's CEO made on a recent earnings call regarding its desire to aggressively pursue acquisitions to fuel growth. TRXC is seen as a likely target, according to MassDevice, SeekingAlpha, and all the other news outlets that are writing about this rumor.

I do not deny the idea that J&J is interested in acquiring TRXC, I deny the idea that TRXC is interested in being sold to J&J. Verb Surgical is the surgical robotics venture created by Google and Johnson & Johnson in March 2015. Verb is already working on a prototype. While it may be attractive for J&J to sidestep the many years required to reach design freeze, complete validation and verification engineering tests, conduct animal/human testing, and go through the 6-9 month FDA 510(k) approval process by acquiring TransEnterix, it's not attractive for TransEnterix, given the journey they have been on, and isn't J&J focused and committed to the success of Verb Surgical? It seems like an about face if J&J came out and acquired TRXC rather than continue building its own platform from the ground up with Google.

Meanwhile, Todd Pope is a top notch executive who possibly played on the same college basketball team as Michael Jordan in 1984? Ha! Talk about a team player.

Pope was head of Cordis, a multi billion dollar division within J&J that was recently sold to Cardinal Health. Pope has been at TransEnterix since 2008. Given his experience, Pope could probably work at any company he wants, but instead he stays at a startup company for seven years. It's my impression that Todd Pope realizes how big this can become, and he's not willing to sell out right before two monumental product launches after putting seven years of sweat equity into the company. Pope owns more than one million shares of TRXC.

I want to think that TransEnterix's venture capital investors who've been invested since the beginning (some are on the BOD) are thinking the same thing. Why sell out now as a pre-revenue, developmental staged company right before FDA approval and two potential blockbuster product launches? It'd be a steal for J&J, not so much for TRXC and its investors. 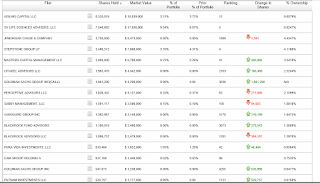 (As of June 2015. Does not include SOFAR 15M share position)
Given the large insider/institutional holdings, TRXC is a relatively low float stock. Combine that with 4m+ shares short as of two weeks ago, and your bound to get a rally on takeover speculation and a newsletter pump. But a 30M+ share volume rally in four days? On a newsletter pump? I don't think so. Either TRXC is utilizing the recent market volatility and selling its remaining $18M in ATM offering to raise money, or this is the anticipation of FDA approval, or both. I have no clue. We'll find out soon enough.

With FDA SurgiBot approval catalyst any day now (expected in Q1 2016), and ALF-X sales on the way, the run in TRXC shares is far from over, and unsuspecting shorts may fuel an eye-popping rally.

I too have evolved over my 2.5 year holding period of TRXC. Definitely showed up a bit early. Have been schooled by lots of smart people. I'm grateful for dollar cost averaging. Rollercoaster of a ride, but it's not over. Baseball game is just getting started. Top of the first. Batter up.

I've built up my position in TRXC to a meaningful holding. Moving forward I am only selectively adding shares to my ROTH IRA for super retirement long term view. I may write $7.5 strike covered calls to generate income. It's my view that anything under $4 is a solid buy long term, under $3 a steal, under $2....forget about it.

Read about the risks behind TRXC here.
Read about how big TRXC can become here.

5 comments to ''The Evolution of TransEnterix"