Neovasc was off more than 40% in after hour trading following release of its Q2 earnings. The earnings report and conference call was a mixed bag, with more bad than good. 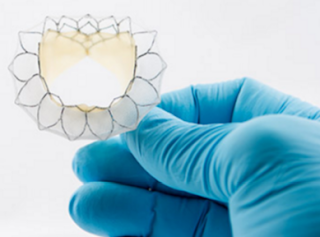 1. Revenues from Neovasc's tissue and consulting business declined nearly 30% year over year, partly due to a customer delay that has since been resolved, and partly due to the fact that Neovasc has been slowly diverting resources from its low margin tissue business to commercialization of Reducer, clinical development of Tiara, and higher margin tissue clients. Revenues from this tissue/consulting business peaked at nearly $16M in 2014.

2. CardiAQ has filed a motion requesting that Neovasc be ordered to halt development of its Tiara device for 18 months, arguing that Neovasc got an unfair head start in the development of its pivotal device that treats mitral regurgitation (heart failure). This would be a devastating blow to Neovasc, as nearly all of its value when it was a ~$600M, $10/share company in early 2015 was tied to the impressive data and headstart Tiara had over its multi billion dollar competitors.

The court is expected to issue a judgement on this motion and others filed by Neovasc and CardiAQ shortly after August 12th.

3. It is 99.99% likely that either party appeals the upcoming court judgement, and extends this litigation for another year or longer. Neovasc expects it will require an additional $5M for future litigation fees, in addition to the $17.7M that has already been spent. This will continue to be a cash drain for Neovasc, and I'd imagine Edwards Lifesciences will delightfully attempt to drain as much litigation fees from Neovasc as possible by lengthening the process.

4. The company has $36M as of June 30. At current burn rates, expect Neovasc to explore a burdensome debt offering, or an extremely dilutive capital raise in Q4.

5. On a positive side, Tiara enrolled its 19th patient and the data following the operation remains as encouraging as the previous Tiara implants. While Neovasc is behind its initial enrollment target, it's far ahead of its competitors and seems to be picking up momentum with the recent addition of the approved 40mm sized tiara valve.

6. Revenues from EU Reducer commercialization continue to post strong growth, albeit off a very low base. The device has been gaining traction in Italy. In the right hands (distributor or potential acquirer), Reducer can become a sizable business, given the market size and unmet clinical need for high risk patients suffering from refractory angina.

If the court upholds the $70M payment and the 18 month operational hold on Tiara, expect Neovasc to drop to pennies. If the court eliminates or reduces the $70M payment and rejects the 18 month operational hold on Tiara, I wouldn't be surprised to see shares of Neovasc double, triple, or even quadruple to $2.00 per share. The judge also needs to rule on patent ownership of Tiara technology, so that decision will also move the needle for Neovasc's share price.

This is an incredibly binary catalyst that will result in either you losing well more than 50% of your capital, or easily doubling it and quite possibly tripling it. I have zero insight into what the judge will decide. This is a gamble, a lotto ticket. Tread carefully.

There is no doubt in my mind that the underlying technology of the Reducer and Tiara are conservatively worth upwards of a billion dollars (based on fact that analyst estimates peg the Mitral Valve market to be upwards of 4x the size of the Aortic valve market, and Tiara is the front runner in being the first commercialized mitral valve device). If Neovasc didn't have this potential bankruptcy inducing lawsuit hanging over its head, it would be trading closer to a $300M valuation, roughly the average its private competitors were acquired for by Abbot, Edwards, and Medtronic.

Even the most experienced trial experts didn't have a handle on the ultimate jury decision (granted juries are unpredictable). Take a look at this note from Leerink earlier this year, and how wrong it ended up being. 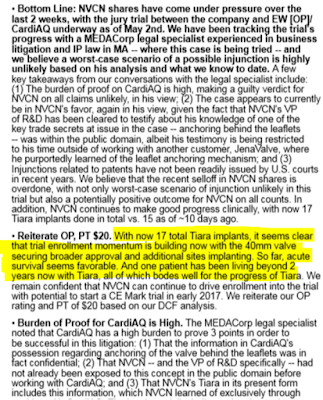 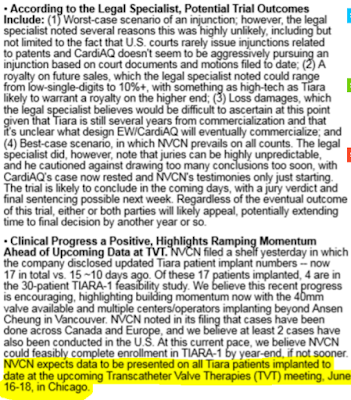 AGAIN, at this point in time, this is a gamble, a lotto ticket. TREAD CAREFULLY.