Is This Lights Out For Neovasc?

Last week, Neovasc informed investors that it planned to appeal the latest court ruling that denied Neovasc a new trial, awarded CardiAQ (now a subsidiary of Edwards Lifesciences) an extra $21M (bringing total judgement Neovasc owes to CardiAQ to $91M), and added CardiAQ inventors to Neovasc's Tiara patent. Neovasc expects the appeal process to take at least a year. Neovasc is also seeking to immediately stay the $91M payments until the appeal process is complete.

Neovasc is trying to buy as much time as possible. Smart. The company is currently valued at $35M and has ~$25M in cash (Q2 cash levels - average quarterly burn rate). The company is cash strapped and doesn't have the means to pay the $91M fine (if they are on the hook for it after the appeal process). Legal costs have amounted to ~$4M per quarter. With the expected appeal resulting in another four quarters (at least) of legal proceedings, it is clear the Neovasc needs to raise money and dilute. Neovasc should be focusing on Reducer commercialization in Europe, moving Reducer through FDA 510K pathway, and furthering Tiara trials/development, not lawsuits.

Until Neovasc can settle the CardiAQ litigation and raise enough money to fund Tiara and Reducer to the U.S. market, shares will be dead money, with the occasional pop on positive Tiara data updates. With ~$25M cash on hand, another year of legal proceedings that at current legal burn rate will cost at least $16M, and the need to remain competitive in the race to develop the first market-ready mitral valve, Neovasc needs to raise money and dilute shareholders. At a current $35M valuation, dilution would hurt existing shareholders, terribly. I expect my long position in my ROTH IRA to be dead money for years, and years, and years. A buyout is always possible, but not until that CardiAQ litigation is settled. 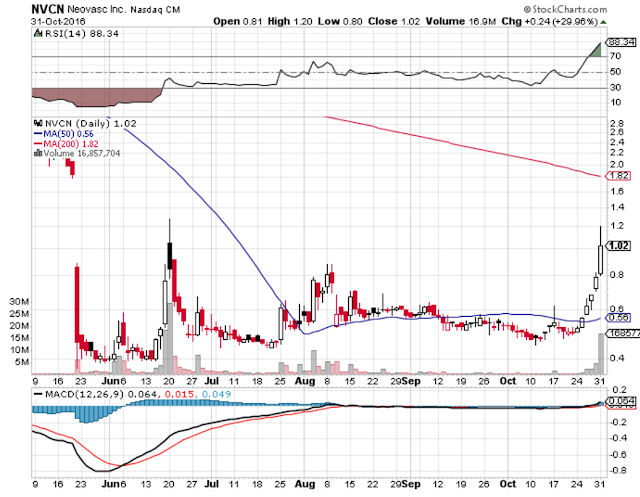 Neovasc investors experienced a nice week long treat after shares jumped more than 100% on considerable volume in anticipation of positive data for both the Tiara mitral valve and Reducer stent to be presented at TCT 2016.


We knew the Reducer data would be positive, as it was in the multi-year COSIRA trials, so nothing new here. Given that Tiara is considered the front runner in the mitral valve space and based on previous data presentations, positive Tiara data presented at the conference should also not be considered a surprise to investors (AKA PRICED IN).

What should be considered a surprise to investors, is the trading halt that occurred in afternoon trading today, and the subsequent news that the judge in the Neovasc vs. CardiAQ (now a subsidiary of Edwards LifeSciences) trial has ordered Neovasc to pay an additional $21M to CardiAQ (BAD NEWS) in addition to the $70M granted by the jury, has denied an injuction/halt of Tiara development (GOOD NEWS), has denied Neovasc a retrial (BAD NEWS), and has ordered two CardiAQ executives to be listed as co-inventors on Neovasc's Tiara patent (BAD NEWS). Investors were tricked.

Shares remained halted into the close and should open tomorrow morning with an official announcement from the company.

At the end of June 30th, Neovasc had ~$36M in cash. Given that Q2 cash burn was $13M (higher due to legal costs), the company probably has $20M- $25M in cash as of the end of September 30th. Another whammy is that due to Neovasc's decision back in 2014 to prioritize its focus on Tiara development and shift away from its revenue generating soft tissue business, revenues will continue to decline. While Reducer sales are picking up in Europe, they are immaterial, with a current annual run rate of ~$1M.

The company now owes $91M to CardiAQ, unless they appeal the entire decision to a higher court, which would delay their payment to CardiAQ, but eat up a considerable amount of their current cash pile in the form of legal fees, with uncertainty that an appeal would even result in a positive outcome. Also, it's worth noting that Neovasc requires tens of millions of dollars (possibly $100M+) to continue the development of Tiara and get it to market, which analysts don't expect to happen until 2019 at the earliest (and that was before the lawsuit debacle).

With a $91M judgement hanging over itself, Neovasc has little negotiating power. The company will not be able to secure debt to pay off CardiAQ. Instead, they will either raise money from investors and dilute at a crazy depressed level (current market cap of $50M doesn't help), or be acquired by EW, BSX, ABT, MDT or another player at fire-sale prices

The Tiara no doubt has immense value. It is a best in class device that is farther ahead and has better data than the mitral vale programs at multi billion dollar medical device companies, and its peers have been acquired for up to $400M. Fully developed and on the market, Tiara would be a multi billion dollar device given the projected size of the nascent mitral valve market. But I don't think a large company would be so kind and pay that kind of money given that Neovasc is under capitalized and has a $91M judgement hanging over its head. Instead, these companies can wait for Neovasc to go under and buy the company for pennies on the dollar.

In my mind, if the $91M judgement stands and is FINAL, the best case scenario for Neovasc is to dilute the crap out of their stock and raise the money to pay off the penalty and move forward with the development of Tiara. The company currently has 67M shares outstanding. Even if they raised the money at $0.50/share and bumped the outstanding shares up to 400M, way down the line (years), with Tiara on the market and Reducer commercialization ramped up, at a $1B-$2B valuation, shares could trade at $2.5/share - $5/share range. That's my last hope.

The lights are incredibly dim at Neovasc right now, but not out....yet.

2 comments to ''Is This Lights Out For Neovasc? "